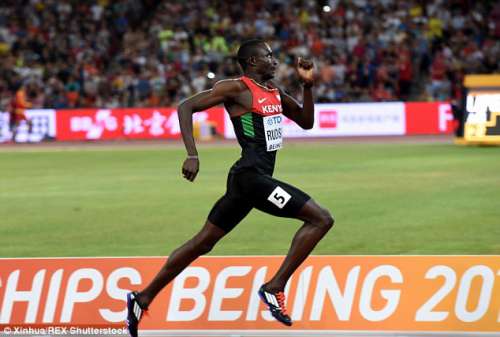 Double Olympic champion and World record holder over 800m, David Rudisha of Kenya, withdrew from the 2017 IAAF World Athletics Championships with an injury.

Rudisha will not defend his World Championships gold after he pulled out of the World Athletics Championships with a quad strain.

On Monday, July 31, an MRI sacn was performed revealing a grade-one-tear.

“I was trying to engage more speed,” Rudisha said.

“In the process I put my muscle under [more] intense stress than when doing normal mileage. I damaged my quad and this saddens and disappoints me a lot.”

“I have been advised that I should take it easy,”

“If I push it with that pain, it could damage me further – it is not the right thing to do or I would run the risk of missing the complete year. I have accepted my fate with a very heavy heart and would like to wish the team well. I will still come back stronger and even challenge for the title in the next world championships.” he added.

Its sad and disappointing to announce my no show in the forthcoming #london2017 WC due to a quad muscle strain. pic.twitter.com/bdM0Zi4QCd

Without Rudisha, the Kenyan men's 800m squad remains as one of the favorites for medals in London.