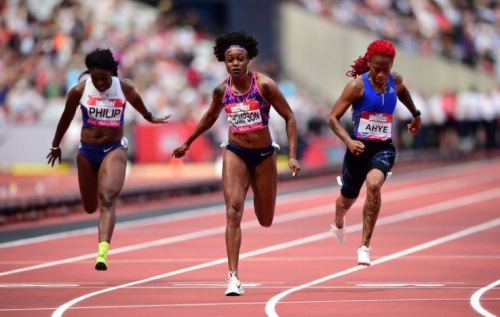 The 24-year-old Thompson with a late surge passed the reigning world 200m champion Dafne Schippers of Netherlands to get the win in 10.94 seconds against -1.4 m/s headwind. What made Thompson's win more impressive was that she ran the 100m race in specially built cushioned trainers.

"The spikes I have I'm not confident with and hurt my Achilles so I’m running in flats," Thompson later explained why she chose not to use spikes.

"They have spikes but they are very petite. They are built especially for me and made lighter." She added.

Kendra Harrison of the United States claimed the women's 100m hurdles in 12.39 while the 2012 Olympic London Olympics champion Sally Pearson of Australia finished in second place in her fastest time in 4 years of 12.48 seconds.

World Record holder Aries Merritt overcame a slow start to get the win in the men's 110m hurdles in 13.09 seconds. Merritt's winning time is his fastest time since his kidney transplant in 2015.