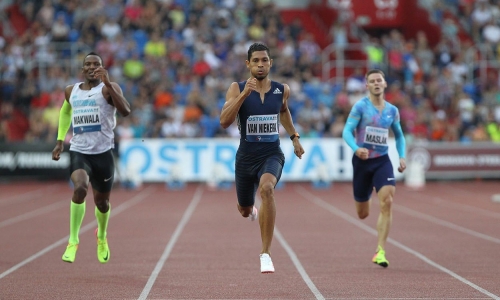 "I didn't come with a specific time in mind but I am pleased with this result," Van Niekerk said.

"I do have a love-hate relationship with the 400m, but I always try to approach it with a positive mindset, not setting myself any limits.

"And the performances keep me going along, which keeps me passionate about what I do." he added.

The 35-year-old Amercian Sprinter Justin Gatlin of the United States sprinted to victory in the men's 100m in 9.96sec.

"I didn't have a great start," said Gatlin.

"I'm not at my A-game at the moment and that sows I'm a human.

"I am still a competitor Now I will be able to go back to training knowing that my bases are are in place."

"I felt good during the first part of the race. I had good legs up until 1 200m. And then it blocked," Dibaba said.

"It's a pity as the conditions were good. I need to train some more to have some freshness at the end of the race."

Sam Kendricks of the United States cleared  5.93m in the pole vault for the win. Poland's Pawel Wojciechowski took a surprise second place with a new PB of 5.93, while world record holder Renaud Lavillenie of France with 5.87m concluded the men's pole vault podium.