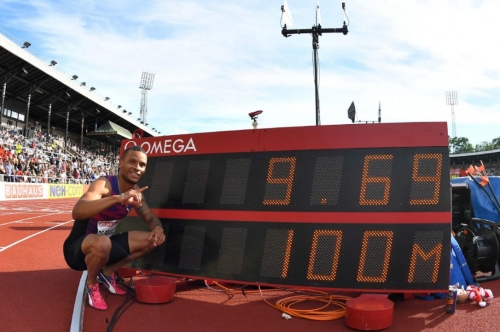 Trippe Olympic bronze medalist De Grasse would have been celebrating a personal best if the strong +4.8m/s tail wind did not not exceeded the permitted limit of 2.0m/s.

It was also a third straight Diamond League victory for the 22-year-old De Grasse.

"I am very happy to have won despite the wind. I feel that I'm improving year after year. But these are only preparations for the big show of the worlds."

"That's the fastest I've ever run, it's going to be a shock to the body. Tomorrow's going to hurt a little bit, but I’m just looking forward to the next race and see what I can do legally." said De Grasse.

Norway's Karsten Warholm took the men's 400m hurdles in  48.82sec. It was a second second consecutive Diamond League victory for the Norwegian hurdler.

Bahamas Steven Gardiner impressed with 44.58sec for the win in the men's 400m.