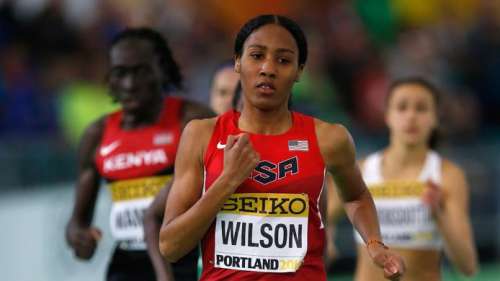 Ajee´ Wilson broke the 15-year-old American 800m indoor record as Sifan Hassan stormed to an impressive victory in the mile at the 2017 Millrose Games.

USA´s Ajee´ Wilson, the wolrd indoor silver medalist, clocked an impressive 1:58.18 to brake the 15-year-old Amrecian indoor record set by Nicole Teter back in 2002. Close behind Wilson finished her training partner Charlene Lipsey, who clocked 1:58.27, a time that was also faster than previous American indoor record. Both athletes produced the fastest times this year in the world.

“My coach (Derek Thompson) and I don’t try to go after records,” said Wilson.

“But before the race he said, ‘Go run your race’. It wouldn’t make sense to not take a crack at it. The last two weeks have been going really well and the training has been great. I know what kind of shape I’m in and it’s all about opportunities.” Wilson told reporters in a post race press conference.

The World indoor 1500m champion Sifan Hassan of Netherland´s impressed in the Wanamaker women´s mile . After being defeated twice earlier this season she went to win the Wanamaker mile in 4:19.89,  a new world lead and 4th all time in history. Siffan´s 1500m split of 4:03.05 is the fastest indoor time this year in the world. Behind Hassan in second and third finished American runners, The Olympic 800m finalist Kate Grace in 2nd in 4:22.93 and Shannon Rowbury in 3rd in 4:23.05.

Another outstanding performance came from 17-year-old Armand Duplatis, who broke his own world junior pole vault record by clearing 5.75m.

Olympic 400m champion Shaunae Miller-Uibo from Bahama´s took the 300m win in a new Bahamian record and equaled the third best mark on the world indoor all-time list of 35.71.

USA´s Ben True with a massive kick over the bell lap managed to cross the line first in the men´s two-mile race in 8:11.33, just 0.23 ahead of compatriot Ryan Hill.  Olympic 1500m champion Matthew Centrowitz had a disappointing race as he placed in 7th with a time of  8:21.07.