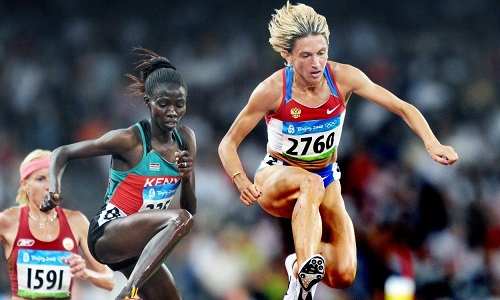 Russian steeple-chaser Ekaterina Volkova, who won bronze in Beijing Olympics in 2008, is among the six Olympic games medalists caught for doping by the IOC’s investigations into stored samples.

Six medallists from the 2008 Beijing Games had their medals stripped by the International Olympic Committee (IOC) on Wednesday after they tested positive for banned substances in re-tests of their samples, the IOC said.

Track and Field had two more positive tests by Spanish hurdler Josephine Onyia and Cuban long jumper Wilfredo Martinez. Both are expected to have their results from Beijing Games annulled.

Uzbeki Soslan Tigiev, who won a wrestling silver in the men's freestyle 74kg event, Ukraine weightlifter Olha Korobka, second in the +75kg category and Belarus weightlifter Andrei Rybakou, second in the 85kg category, Kazakh freestyle wrestler Taimuraz Tigiyev, who won silver in the freestyle, Nastassia Novikava of Belarus, a bronze medallist in the 53kg weightlifting , were among those medalists caught using banned substances.