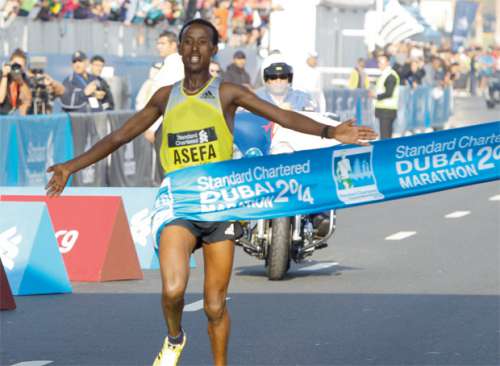 The organizers of the BMW Frankfurt Marathon hope their event will move smoothly back into the fast lane when the 33rd edition is held this Sunday. What can be achieved in the city beside the River Main was shown three years ago when Wilson Kipsang ran a course record of 2:03:42, which at the time was only four seconds outside the world record.

Frankfurt has since retained its position as the second fastest marathon course in the world behind Berlin in terms of races eligible for official world records. Kipsang of Kenya had already proven what the course offered in breaking 2:05 in 2010. For all its reputation for fast times, Frankfurt’s variable weather conditions can dash even the most ardent hopes.

“Last year we filmed Ice Age here in Frankfurt, this time it was Gone with the Wind,” joked Markus Philipp, the press conference master of ceremonies, after elite runners had to battle stormy and wet conditions in 2013. On race morning of 2012 it was so cold that organisers threw salt on the corners to prevent freezing. Extreme conditions have not been forecast for this Sunday, although the wind may again be a factor. “But it is too early to say. We have had all sorts of weather during race weekends in the past,” said Race Director Jo Schindler, who announced a last minute addition to the elite field with the return of the women’s course record holder Meselech Melkamu. The men’s entry is headed by fellow-Ethiopian Tsegaye Mekonnen. Around 15,000 runners are expected to run the BMW Frankfurt Marathon, which is an IAAF Gold Label Race.

“If weather conditions are suitable then we’re hoping for a time under 2:04:57,” said Jo Schindler. At present Wilson Kipsang’s winning time in 2010 is the second fastest in the race’s history. There are high hopes for Tsegaye Mekonnen to produce such a performance on Sunday. The 19 year-old Ethiopian youngster ran an unofficial world junior record of 2:04:32 when winning in Dubai in January. After this spectacular debut performance Mekonnen said that his next objective would be the Ethiopian record of none other than Haile Gebrselassie who ran what was then a world record of 2:03:59 in Berlin in 2008.

Defending champion Vincent Kipruto had originally targeted a 2:04 time last year. Running in the wet and windy conditions he won with 2:06:15. “I will come back next year to achieve my goal,” the Kenyan said. The men’s elite field has fine depth with ten men on the start list showing personal bests of sub-2:08:30. However, Ethiopia’s Getu Feleke is no longer among them. The winner of this year’s Vienna Marathon has had to withdraw because of an achilles tendon injury.

While the men’s field has lost a top contender there is a world-class addition among the women: the course record holder Meselech Melkamu will return to the race, where she was so impressive two years ago. Running her marathon debut, the Ethiopian clocked 2:21:01. Melkamu, who is the African 10,000 m record holder, intented to return to Frankfurt in 2013, but pulled a muscle and had to withdraw. She then finished second in Dubai and clocked 2:21:28 for fifth place in Boston earlier this year.

Taking into account the double Berlin Marathon champion Aberu Kebede, who has a personal best of 2:20:30, and Meskerem Assefa (2:25:17) there is a strong Ethiopian challenge in the women’s race as well. Kenyans Sharon Cherop(2:22:28) and Flomena Chepchirchir (2:23:00) are also among the favourites. There was bad luck for Russia’s Maria Konovalova who hoped to break the world master record on Sunday. An injury forced her to cancel her trip to Frankfurt.

“We have a couple of very strrong women in the field, so I hope we can make the next step and get a course record,” said Jo Schindler. “Of course you are always dreaming of getting a sub 2:20 time, but for such a result everything has to be perfect.”

Selected athletes of the elite fields including personal bests