Nesta Carter on a chilly track in Stockholm won the 100m at the Diamond League meeting  DN Galan on Thursday. 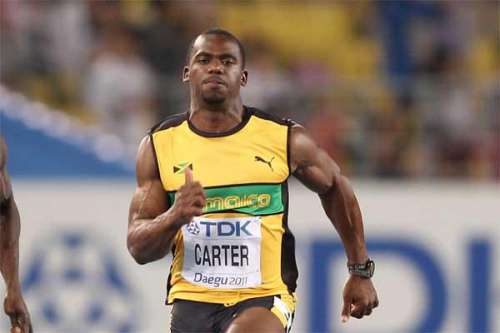 The 28 year old Jamaican was the only sprinter to dip below the 10 second barrier as he won the race in season's best time of 9.96 seconds.

Carter on his way beat Keston Bledman of Trinidad and Tobago, who finished in 10.09 and Britain’s Chijindu Ujah, who was third in 10.10.

The weather conditions with strong and changing winds and low temperatures kept influencing the event as  Konstadinos Filippidis of Greece defeated the field with the world record holder Renaud Lavillenie, who manged to miss all three attempts at 5.60 meters. Filippidis only manged to clear 5.60m but good enough forthe win.

“I’m very disappointed,” said Lavillenie, who had been unbeaten in 20 consecutive competitions. “The conditions were very difficult today with strong wind and cold. When you’re waiting more than two hours on the track it’s hard to stay warm.”

After some problems with the starter in the men’s 400 hurdles, Michael Tinsley of the U.S. edged Puerto Rico’s Javier Culson with a time of 49.60.

American Tianna Bartoletta with a massive leap of 6.98 meters in her final attempt defeated Eloyse Lesueur of France, the European champion, by 4 centimeters.

Antti Ruuskanen of Finland won the men's javelin with a brilliant toss of 87.24 meters. In the women's high jump Russia's Mariya Kuchina of Russia won with a mark of 1.94.

The men's long jump saw South Africa's Godfrey Mokoena to win with a jump of 8.09 meters.

Adam Kszczot of Poland clocking negative lap splits won the men’s 800 meters in 1:45.25, while Hiwot Ayalew was the quickest in the wome's steeple with a time of 9:17.04.