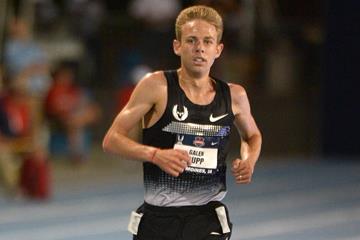 Rupp who is planning on running a fast 5000m in Paris next week stayed back in the pack letting others direct the pace. The 29 year old Rupp made the race some 600m to go as he moved upfront with Chris Derrick on his tale. But the London Olympic medallist was able to hold off  Derrick to win his record braking #6 10000m title.

"You know, I was trying to run as easy as possible," Rupp told reporters after the race.  "I'm still planning on running Paris, so I didn't want to make it any harder than it needed to be."

Frank Shorter shorter who won 10000m gold back in the days  has won the US national titles  5 times.

The women's 10000m race was won by California native runner Kim Conley, who was able to push away in the last 100m from the former NCAA star Jordan Hassay to win the race in 32:02.07.

"It is so meaningful, I can't even begin to describe it," said Conley, a resident of West Sacramento. "To win my first title here, with the Sacramento Running Association here and the whole Sacramento running community, it's just perfect." Said Conley after the finish.