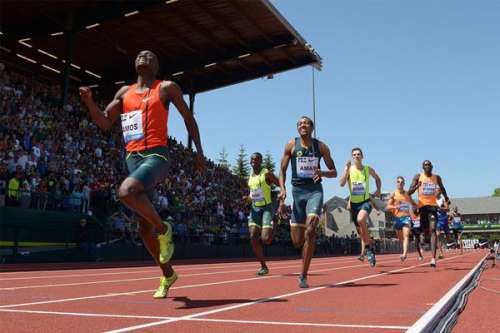 London Olympic silver medallist, Nijel Amos, of Botswana with a massive kick over the last 100m  took the win in the men's 800m setting a season's best mark in the world.  Olympic champion and a world record holder in the event, David Rudisha, who returned after missing a whole year due to a knee injury finished seventh. World 800m champion Ethiopia's Mohammed Aman took second 0.36 behind Nijel Amos.

World 1500m indoor champion Ayanleh Souleiman  produced a very fast mile as he won in 3:47.32. Also the second place finisher Silas Kiplagat clocked an impressive 3:47.88, Total of six men in the race broke the 3:50 in the men's Bowerman Mile.

American sprinter, Justin Gatlin, won his second Diamond league meeting this year after he clocked a blistering wind-aided 9.76 in the 100m defeating countryman Michael Rodgers by 0.04 of a seconds.

In the classic duel between Grenada's Kirani James and American LaShawn Merritt, the Grenadian prevailed by edging the American at the line.  Both sprinters finished in a season's best time of 43.97.

American Tori Bowie also clocked the fastest time this year over 200m in 22.18, with Nigeria's Blessing Okagbare in second in 22.23PB, while USA super-star Allyson Felix took third in 22.44.

Jamaica's Novlene Williams-Mills was fastest in the women's 400m in 50.40, edging American Francena McCrory by .13 of a second while her compatriot Kaliese Spencer took the win in the 400 hurdles in 54.29.

Kenyan Hellen Obiri out-kicked world champion Abebe Aregawi to the women's 1500m with a mark of  3:57.05 - fastest in the world this year.

Another world leading performance came in the women's 3000m steeple as Ethiopia's Sofia Assefa won the meeting in 9:11.39.