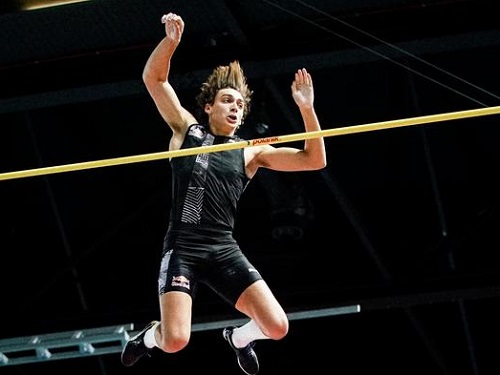 Armand “Mondo” Duplantis broke Renaud Lavillenie’s world record by clearing 6.17m in his second pole vault competition of the season at the Orlen Copernicus Cup in Torun, the fourth leg of the World Athletics Indoor Tour.

Lavillenie set the previous world record with 6.16m in Donetsk 2014. The 20-year-old Swedish star had a clean-sheet at 5.52m, 5.72m, 5.92m and 6.01m before clearing 6.17m in his second attempt. Duplantis began setting world age group records at the age of seven and had already broken the world under 20 record with 6.05m, when he won the European gold medal in Berlin in 2018.

“It’s something that I wanted since I was three years old. I can’t describe what I am feeling now. It’s a big year, and it’s a good way to start it. After the first attempt I thought I just need two more attempts at the world record height and I got it. I was pretty confident that I had it. It’s a big dream. It’s a whole process building to that moment. I can’t get my head around it”, said Duplantis.

Ethiopia’s Gudaf Tsegay set the world seasonal best and the seventh fastest time in history in the women’s 1500 metres with 4:00.09. Her compatriot Hailu Lemlem set the world under 20 record with 4:01.79 breaking Tsegay’s previous mark set in Glasgow in 2016. Morocco’s Rababe Arafi finished third with 4:02.46.

World and European medallist Maryna Beck Romanchuk from the Ukraine scored her second consecutive World Indoor Tour win in the women’s long jump with a world leading mark and a career best of 6.96m one week after finishing first in Karlsruhe with 6.92m. The 24-year-old Ukrainian jumper produced a solid series of jumps, which included 6.85m in the fourth round and 6.77m in the fifth.

Alina Talay from Belarus won a world-class 60m hurdles final in 7.87 edging out Nigeria’s Tobi Amusan and US Christina Clemons, who finished second and third with the same time of 7.89. Three more women dipped under the 8 seconds barrier: Nooralotta Neziri from Finland (7.97), Luca Kozak from Hungary (7.99) and Reetta Hurske from Finland (7.99).

European indoor champion Jan Volko from Slovakia won the men’s 60 metres with 6.58 holding off Netherland’s Joris Van Gool (6.59) and Richard Kilty from Great Britain (6.60).
US Shania Collins clinched her second win in the World Indoor Tour season in the women’s 60m with 7.24 ahead of Maja Mihlinec from Slovenia and Ajla Del Ponte from Switzerland, who clocked the same time of 7.26.