• Pole vaulters Kendricks, Duplantis and Lisek in the spotlight in Dusseldorf 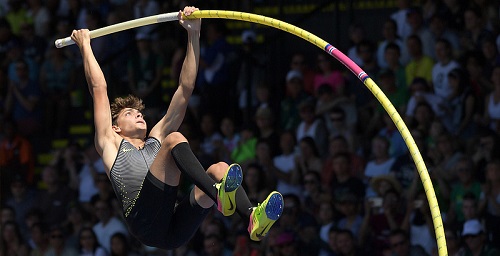 The three medallists of the World Championships in Doha Sam Kendricks, Armand “Mondo” Duplantis and Piotr Lisek will be in the spotlight in a world-class pole vault competition in the Arena Sportspark in Dusseldorf at the PSD Bank meeting, the third leg of the World Athletics Indoor Tour.

The three pole vault stars cleared the 6 metres barrier in 2019. Kendricks won the world outdoor title with 5.97m in Doha beating Duplantis on countback and set the US outdoor record with 6.06m in Des Moines. The US star finished second in his only previous appearance in Dusseldorf in 2018 with 5.78m behind Lisek, who won 5.86m. Duplantis, who won the European title in Berlin with 6.05m, will be competing in Dusseldorf for the first time in his career. Young German Bo Kanda Lita Baehre finished fourth at the World Championships in Doha and won the European Under 23 gold medal in 2019.

Nigeria’s Tobi Amusan starts as the favourite in a world-class 60m hurdles race four days after winning in Karlsruhe in her lifetime best of 7.84. The 2018 Commonwealth champion will face Christine Clemons, who finished second in Karlsruhe in 7.98 and first in Paris Bercy in 7.91. German fans will cheer on 2017 world bronze medallist Pamela Duktiewicz and 2017 European Indoor champion Cindy Roleder.

Reigning world indoor champion and three-time European champion Adam Kszczot from Poland will take on 2019 world 1500m bronze medallist Marcin Lewandowski from Poland and last year’s 800m world silver medallist Amel Tuka from Bosnia in the men’s 800 metres, one of the best middle-distance races of the evening. Lewandowski set the Polish indoor record of 3:36.50 in the 1500m in Torun and the national outdoor record of 3:31.46 at the World Championships in Doha.

World Indoor bronze medallist Bethwell Birgen will be bidding to win his third 3000m race of the 2020 World indoor Tour season after Boston and Karlsruhe. The Kenyan middle-distance runner will face reigning 5000m world silver medallist Selemon Barega from Ethiopia, who will make his debut this indoor season.

In the women’s 400 metres reigning 400m outdoor champion Justyna Swiety Ersetic from Poland will face European 400m hurdles gold medallist and Swiss record holder Lea Sprunger, who finished second in her first 400m race of the season in Karlsruhe, and Netherlands’ Lisanne De Witte, who won the 500m in Boston and finished third at the 2019 European Indoor Championships in Glasgow.

In the men’s 60 metres World Indoor Championships finalist Hassan Taftian from Iran will face against 2019 European indoor champion Jan Volko from Slovakia and US Brandon Carnes, who won in Paris Bercy in 6.61.

US Shania Collins will be looking to win her second race in the women’s 60m race after taking first place in 7.20 in Karlsruhe ahead of Switzerland’s Ajla Del Ponte. The line-up also features Gambia’s Gina Bass, world finalist in the 200m in Doha and winner in the 60m in Mondeville last Saturday in 7.20.