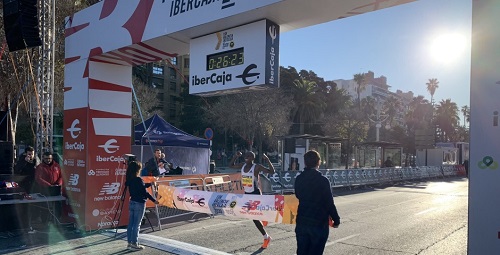 The 20-year also broke the official world 5km record with his half-way split of 13:18. Kipruto clocked even faster second half of the race 13:06 but by the World Athletics rules is not eligible for record ratification.

“I’m over the moon,” said  Kipruto. “When I clocked 26:46 in Prague in 2018, I set myself the target of breaking the world 10km record and today my dream came true. I’m very thankful to the organisers for relying on me to set the record and to the city and the people of Valencia for treating me so well and for their support throughout the race.”

Benard Kimeli (Kenya) was second with a time of 27:12 while Switzerland’s Julien Wanders bettered his own European record with 27:13 to take third place.

Sheila Chepkirui (Kenya) came very close to Women's 10k World record as she clocked 29:46 for the win. She missed the missed Joyciline Jepkosgei's World 10km record by only 3 seconds.

It was the first time three women finished had a 10km road race inside 30 minutes.