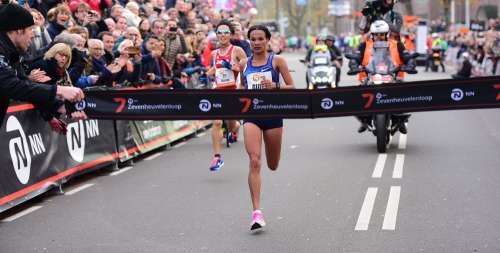 Gidey finished the 15km race in a stunning 44:21, a 1 minute and 16 seconds fastesr than the previous World record set by Kenya's Joyciline Jepkosgei in Prague two years ago.

Gidey, who won World Championships 10,000m silver medal last month, split 15:09 for the first 5 kilometers. She dramatically increased the pace in the next 5 kilometers crossing the 10KM marker in an incredible 29:44. The 21-year-old kept pushing the pace with 2:49, 2:52 and 2:50 splits in the final 3 kilometers. Gidey covered the last 10km in an unbelievable 29:12, the fastest 10km ever produced by a women under any conditions.

"I felt I was in good form in preparation for the (race) and my legs felt good all through the race," said Gidey, who rose to prominence in the U20 ranks after taking back-to-back world U20 cross country titles in 2015 and 2017. "I was quite surprised to see how much time I was able to get off the previous world (best) to be honest but I had great legs and it was a really nice race."

Stephen Kissa of Uganda was the winner in the men's race with 41:49 to become the seventh fastest performer over the distance.