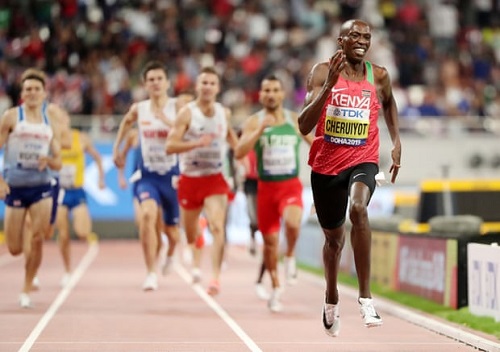 Kenya's Timothy Cheruiyot won the men's 1500m with a dominant run on the final day of the IAAF World Athletics Championships in Doha.

The 23-year-old, Cheruiyot, who took silver at the 2017 World Championships, led the race from gun to the tape to finish more than two seconds ahead from rest of the field.

Taoufik Makhloufi of Algeria, the 2012 Olympic champion won silver with season's best time of 3:31.38 while Poland's Marcin Lewandowski broke his own Polish national record to win bronze with a time of 3:31.46. Norway's 19-year-old Jacob Ingebrigsten finished in 4th place in 3:31.70.

Uganda's Joshua Cheptegei, who was 2nd two years ago in London with 26:49.94, ran a very strong final 2 laps to beat Ethiopia's Jomif Kejelcha for the gold in  a World leading time of 26:48.36. Kejelcha