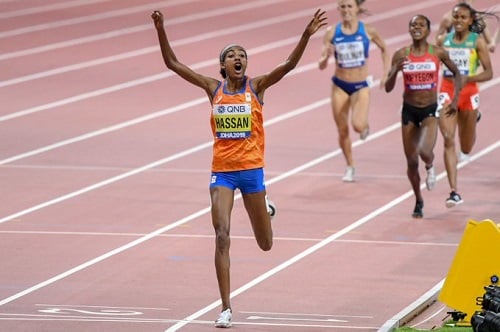 Sifan Hassan of Netherlands destroyed the Women's 1500m final field to win her second global title with a sensational championships record of 3:51.95 in Doha on Saturday.

Hassan became the first athlete in history to win 1500m and 10000m at the same Word championships.

Hassan took the lead after the first 250m and never looked as she powered home with the 6th fastest time in the history of 3:51.95.

Hassan's victory comes 6 days after her coach Alberto Salazar, the head of Oregon based Nike Oregon Project, was banned from sports for 4 years for breaching multiple anti-doping rules.

“It has been a hard week for me,” Hassan said. “I was so angry. I couldn’t talk to anyone. I ran all out. I wanted to show that hard work can beat everything.”

“Given the news of the past couple of days, I think there is a cloud,”

“There’s no avoiding that. But all you can do is focus on your performances and for me to do that kind of race out there.” Said Great Britains's Muir who finished 5th with a season's best time of 3:55.76.

The second place in the women's 1500m final took defending champion Faith Kipyegon of Kenya with a new national record of 3:54.22 while Ethiopia's Gudaf Tsegay took bronze with a new personal best of 3:54.38. In 4th place, Shelby Houlihan clocked a new American record of 3:54.99.