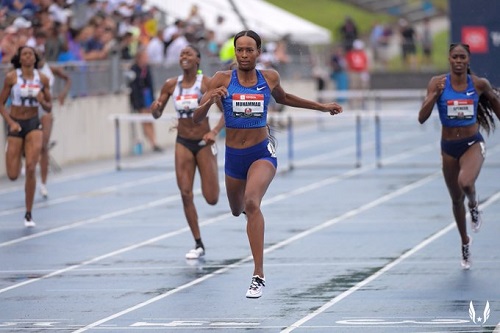 “My coach kept telling me it was there,”

“I just had to trust in my fitness and go for it.” Muhammad told NBC.

The 19-year-old Sydney McLaughlin finished second in a season's best of 52.88 just 0.13 shy of her personal best, while Ashley Spencer equaled her life time best of  53.11 to take third.

In the women's heptathlon, Erica Bougard clocked 2:12.41 in the final event the 800m to overcame Kendell Williams‘ 66-point lead to defend her U.S. title. Bougard totaled 6663 points, the 3rd best performance this year in the World. Kendell Williams set a new personal best and 2019 World #4 with 6610 points to take second place.

In the women's 200m final Dezerea Bryant prevailed with 22.47 seconds with Brittany Brown in second in 22.61.

Craig Engels was a surprise winner in the men's 1500m final in 3:44.93. In a thrilling sprint finish Engels managed to hold off Olympic 1500m champion Matthew Centrowitz by 0.04 seconds.  Centrowitz finished in second pace to make his seventh straight U.S. Olympic and or world championships team. Josh Thompson claimed third place with a time of 3:45.25.

Donavan Brazier was the winner in the men's 800m (1:45.62). The Rio Olympics bronze medalist Clayton Murphy in the final 100m went from fourth to 2nd while Bryce Hoppel made his first US World Championships team by taking third.

Shelby Houlihan who won the 1500m a day earlier won the 5000m on Sunday. Houlihan is not expected to race the 5000m at World champiosnhips in Doha as she is focusing on the 1500m.

In the men's 110m hurdles final, Daniel Roberts took the title in 13.23 beating Grant Holloway, the World leader in the event with 12.98, and the 3-time U.S. champion Devon Allen. Holloway dived across the finish line to take second securing his first world U.S. team. Allen who took third place clocked 13.38 seconds only 0.01 seconds ahead of Freddie Crittenden.