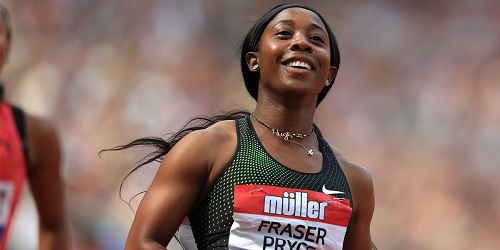 The 2019 World leader (10.73s) and the 2-time Olympic champion Fraser-Pryce easily won the 100m dash in 11.00 (w +1.1). Maja Mihalinec of Slovenia finished in second 0.27 seconds behind the winner, while Joniele Smith of Jamaica finished in third in 11.35 seconds.  Fraser-Pryce will return to competition this week to contest in the 100m at London Diamond League.

Nijel Amos, the 800m World leader with 1:41.83 from last Friday's Monaco Diamond League, won the 400m heat 2 in a new personal best time  of 44.99 seconds. Amos became the first sub 1:42 800m runner to hold a 400m personal best inside 45 seconds. Emmanuele Bamidele of Nigeria clocked the fastest time in the 400m from heat 1 with a new meet record of 44.78 seconds. Nijel Amos clocked the second fastest time overall while Trinidad and Tobago's Michael Cedenio from heat 1 and Jamaica's Nathon Allen from heat 2 clocked 45,57 seconds to share the 3rd place.

Jamaica’s Megan Tapper set a new meet record and a season-best to win the 100m hurdles in 12.66s to win the event ahead of Tiffany McReynolds of the USA was crossed over in 12.72 and Pedrya Seymour of the Bahamas who clocked 12.78 for third.

Lamont Marcell Jacobs of Italy took a surprise victory in the men's 100m dash. The 24-year-old Italian won the heat 2 in a new PB and meeting record of 11.04 seconds.