• RunCzech Starts Season With the Napoli Half Marathon 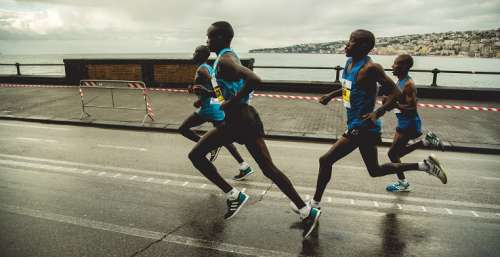 Again this year RunCzech, the organizer of famous running events in the Czech Republic, starts its running season in Italy. Napoli City Half Marathon will take place on Sunday, February 24 and will welcome over 7000 runners. The course is leading through the most enchanting places of the city, and 14,5 km of it goes along the sea, becoming the most 'seafront' half marathon course in Europe.

The Napoli City Half Marathon is included in the IAAF, FIDAL, and AIMS calendars. Besides the half marathon distance it offers also the Relay Twingo (10+ 11km) and non-competitive 2,5 km Family Run & Friends open for everybody.

The Napoli City Half Marathon becomes a candidate for being one of the fastest half marathons in the world at the beginning of the year. The goal is to beat the course record, but not only. The main goal is to stay under the 60 minutes barrier in the men's race and under 1h08'00 in the women’s. As a reminder, 2018’s edition was won by Abel Kipchumba with a great time of 1h00'12", marking a new course record, as well as improving his personal best. The winner's time among women was even more sensational: Eshete Shitaye, Ethiopian by origin but running under the flag of Barhein, saw success in 1h08'38".

MEN - Amongst the top ten favorites to win the 2019 Napoli City Half Marathon, we find six Kenyans, one Moroccan, one Swed, and two Italians. Stefano La Rosa returns after last year's performance, when he came in 5th with 1h04'25" and, joining him, will be the Italian national teammate Yassine Rachik, bronze in marathon at the 2018 European Championships (originally from Morocco). On paper, the favorite seems to be the Kenyan Josphat Kiprop Kiptis, who has a personal record in the half marathon distance of 1h00'21". He could possibly set a new personal best and at the same time go under the one hour mark. Kemei, with a personal record of 1h00'44", and Kalale, with 1h00'47", have both had an exceptional 2018 and will certainly fight to the end to win and beat Kiptis. Finally, but not least, is Gilbert Kipkoech Bii who is certainly not to be underestimated with his 1h01'14" time.

WOMEN - Three Kenyans, an Ethiopian, two Ukrainians, one Czech and two Italians - the Napoli City Half Marathon is truly international. The Kenyans are undoubtedly the top contenders, amongst which Angela Tanui is the favorite, as her personal record of 1h07'16" achieved at Roma Ostia three years ago or her recent win at the Venice Marathon would indicate. The other Kenyan, Betty Lempus (with bib #2), has a personal best of 1h09'25", but everything is possible in any given race, which is also true for the Ethiopian Mhretu (with bib #3), who boasts a best half-marathon time of 1h10'00". There is a lot of hope and expectations for the two Italians; Giovanna Epis, especially since she started being coached by Giorgio Rondelli, is always a strong contender even though she had to unfortunately miss the 2018 Europeans, whereas the Aosta Valley native, Catherine Bertone, is very popular and can certainly put out a great performance. RunCzech organizers are also happy to welcome a young and promising Czech athlete Kristyna Dvorakova, who will run in Napoli for the first time. It will be a pleasure to see the Finnish Noora Honkala, who twice won the Sorrento-Positano Ultramarathon 54 km, another Napoli Running race. Noora is amongst the best in the world in races of 100km and beyond...

All information about the events at www.napolirunning.com.