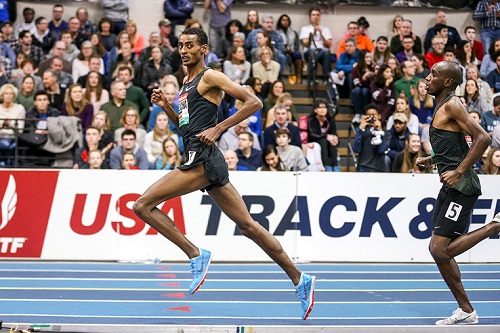 “I’m very happy but I came very close,” said Kejelcha. “I will try it again this year and I’m confident I can break it.”

In the men's 800m Kenya's Michael Saruni set a new African record and becomes the second fastest 800M of all time indoor with 1.43:98. In the home stretch, Saruni defeated American Donovan Brazier who clocked a new American record of 1:44.41.

The Olympic Champion, Ryan Crouser, set a massive personal best and new World lead in the men's shot put with a huge throw of 22.33m. Crouser's 22.33m throw achieved several things. It was the best indoor throw for 11 years, it broke the 30-year-old meeting record and moved him to fourth on the world indoor all-time list.

Konstanze Klosterhalfen moved to fourth on the European all-time mile lists with 4:19.98 to win at the Millrose Games. Klosterhalfen also broke the 34-year-old German indoor 1500m record with 4:02.70 en route!