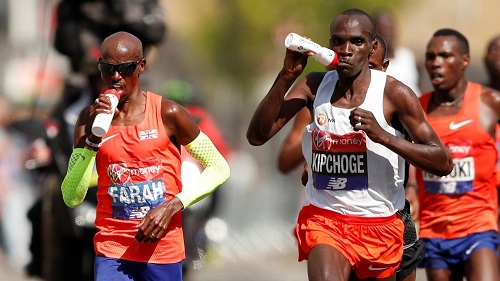 A year ago Kipchoge won his third London Marathon title and then established a new marathon world record of 2:01:39 at the BMW Berlin Marathon.

“I am looking forward to racing Sir Mo Farah again. He is a great champion and proved in Chicago that he can win a major marathon so I relish the battle with him and also the many other great athletes that I’m sure will once again be on the Start Line in London.” Kipchoge said.

“I had a memorable 2018, winning the Virgin Money London Marathon and then setting a new world record at the BMW Berlin Marathon. I’m hoping that 2019 is just as good to me," he added.

Hugh Brasher, the London Marathon director said he was delighted to have set up a mouthwatering showdown between Mo Farah and Kipchoge.

“There is no doubt that Eliud Kipchoge is the greatest marathon runner of all time,” he said “Since Sir Mo Farah won the Chicago Marathon in October, everyone has been talking about another head-to-head between Mo and Eliud and we are absolutely thrilled that this showdown will happen.

“We will see two absolute legends of distance running competing over 26.2 miles of roads in the greatest marathon in the world. I cannot wait until Sunday 28 April to see who comes out on top.”