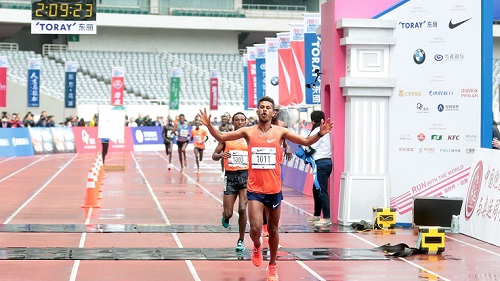 The 21-year-old Tura defeated his compatriot Tsegaye Mekonnen in a sprint finish to claim the 2018 Shanghai marathon title in 2:09:33. Both  Tura and Mekkonen clocked the same time, however, Mekonnen had to settle in second place. Dickson Tuwei of Kenya concluded the men's podium in 2:09:21.

Yebrgual Melese broke away from the lead pack in the final stages of the race to cross the line in 2:30:37 smashing the Shanghai marathon course by 1 minute and 15 seconds. The 20-year-old Azmera Abreha took second place with a massive personal best of 2:21:51, while the third place claimed Kenya’s Betty Lempus, who bettered her previous PB by almost six minutes to 2:23:41.

Great Eliud Kipchoge,  the fastest marathon runner of all time, gave a start to some 38,000 runners in cold and rainy Sunday morning.