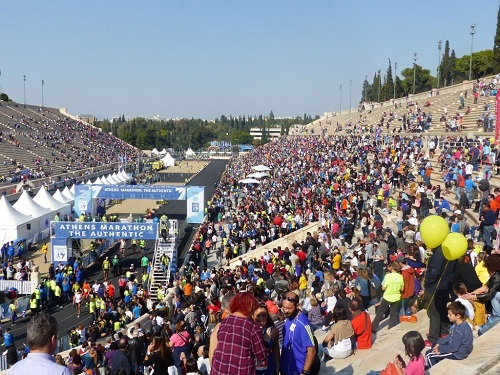 The resounding success of the “Athens Marathon. The Authentic” in its growth in participants and elite performance in recent years was confirmed by the men’s winner of the title in the 36th edition on Sunday, Brimin Misoi of Kenya, running the third fastest ever on the historic course of 2:10:56, just one second slower than it took Stefano Baldini of Italy to win the Olympic title on the same course in 2004.

It was a day of record breaking in terms of overall participants, with 18,750 runners who entered the marathon and, adding various shorter distance events held in conjunction, a total of 55,000.

But the organisers are not content to rest on their laurels, looking ahead to possible further expansion by spreading this celebration of distance running over two days. What is certain is that Athens retains its historic status in the marathon, supported by the AIMS Best Marathon Runner of the Year for women, Gladys Cherono of Kenya, who is keen to run the famous course one day.

The growth of the “Athens Marathon. The Authentic“ while Greece has endured deep economic hardship has surprised even Kostas Panagopoulos, President of the Hellenic Athletics Federation (SEGAS).

It was not so long ago that the entry list for the marathon hovered around 5,000 and now it has reached 18,750: “The truth is, this is a surprise even for us. Our plan was to improve the Athens Marathon year after year but we couldn’t imagaine such a fast growth in only seven years. Greece has suffered a major economic crisis so the growth of the Athens Marathon was at the same time as the country was going down in terms of the social and economic situation.”

The organisers have had to cope with this increased popularity and now consider a change in programme, making it truly a weekend of running in what would be a strengthened partnership with the Greek government: “The State has to be involved in this project in order to create all the facilities we need at the start. We have different plans for the years to come. For example, if we are not in a position to have those new facilities next year, we are thinking of a two-day race, having the 5k race on Saturday afternoon to have more space on Sunday, more wave starts, more participants.”

One who has contributed advice to Athens from a lifetime of organising races is Horst Milde, founder of the Berlin Marathon in 1974 and co-founder of AIMS, the Association of International Marathons and Distance Races in 1982. Speaking in Athens after receiving a Lifetime Achievement Award from his fellow AIMS members, he emphasised his long term link with Athens and its future potential: “I ran a Cross Country race at Olympia back in 1965 as part of a team from Berlin University and then went to the 2004 Olympics here. The place has a fascinating history. I am telling every marathon runner: At least once in lifetime you have to run in Athens.”

Also lending her support to the continued growth of the Athens Marathon is Gladys Cherono. The Kenyan received the women’s award for the Best Marathon Runner of the Year at the AIMS Gala on Friday and the triple Berlin Marathon winner and fastest woman marathoner in 2018 reflected: “Maybe one day I might also run the Athens Marathon.”

Through tough economic times the organisers of the „Athens Marathon. The Authentic“ have held on to their belief that the race would not perish. Kostas Panagopoulos, the SEGAS President, looked ahead with this rousing message for future development: “I believe the 'Athens Marathon. The Authentic' will continue to be this incredible event we have created over the last few years. We have the Know How, we have dedicated people, we have the Federation, of course and we have excellent volunteers and we have the authorities – so we can do it and we will.”