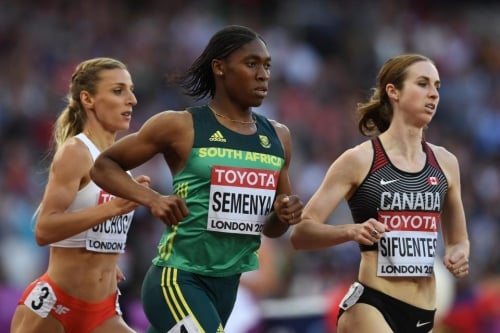 At the World Champions in London Semenya comfortably claimed gold in the 2-lap race in a new personal best time of 1:55.16, the fastest time in the world in nine years. She also added another world championships medal by winning the bronze in the 1500m.

“We will be gunning for that (800m world record) in the next season. I think she can probably break it already but we’ve got to find the right race because you don’t want to put all your cards on the table and then get beaten,”  Semenya's coach Jean Verster told South Africa’s Independent Newspapers on Monday.

“I believe a time of 1:52 is possible. It is just a matter of getting in the right race with the right pacemaker,” Verster added.

Verster also said that Semenya will again attempt the 800 metres and 1500m double at next year’s Commonwealth Games in Queensland, Australia (April 4-15) before attempting the world record.

In her last race in 2017 Semenya broke the world record in the 600m at the ISTAF Berlin on August 27. The South African ran 1:21.77, improving the former 20 year-old mark from Cuba’s Ana Fidelia Quirot by almost one second.

The women's 800m world record stands at 1:53.28 from 1983 set by Czech Athlete Jarmila Kratochvílová. Many believe Kratochvílová achieved the record with a help of doping.