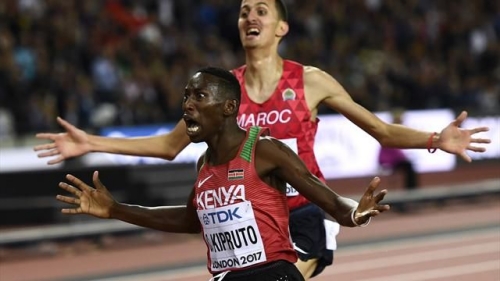 The American Evan Jager, who controlled the race for nearly seven laps was passed by Rio Olympics champion, Kipruto, who pulled away from the American with 300m to go to cross the finish line in 8:14.12.

Soufiane El Bakkali of Morocco claimed the silver with a time of 8:14.49 as Jager held on to take bronze in 8:15.53 to become the first American steepler to win a World championship medal in the steeplechase.

"That was a bit of a surprise. I thought I would maybe get a medal next time, so this is great," said Kipruto, who in June injured his ankle at the Kenyan trials and was able to resume his training only one month before the World championships.

"I used my plans well and last night for morale I told myself: 'I am Olympic champion and that others must break me'. There are others who are strong but I used my own plans. I knew if the race was around 8:10 that I was going to win." he added.

Kipruto continued Kenya's superiority in the men's 3000m steeple as the Kenyan athletes have won 12 out of 15 World championships golds in this event.