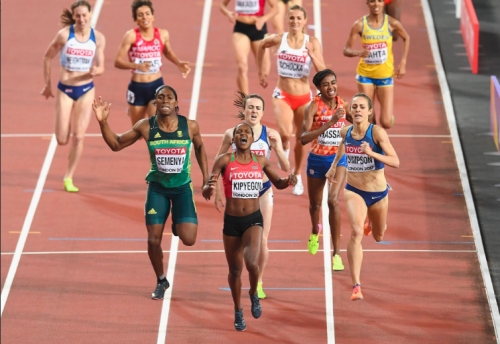 In a dramatic finish Olympic champion Faith Kipyegon of Kenya pulled out the win in 4:02.59 ahead of USA's Olympic bronze medalist and one of the best tacticians in this event Jenny Simpson of the United States (4:02.76). Meanwhile Olympic 800m champion Caster Semenya of South Africa broke the hearts of British fans, as she edged Laura Muir for the bronze - 4:02.90 to 4:02.97.

Defending champion Genzebe Dibaba was nowhere near, while Dutch runner Siffan Hassan, the fastest woman in the world this year with 3:56.14, faded from 2nd to 5th in the last 20m.

Five years ago at London Olympics, Faith Kipyegon, who was 18 at the time and had won the world junior championships gold, stopped in the 1500m heats. On Monday, August 7, she added a World championships gold, next to her's Olympic and Commonwealth 1500m titles.

Wow. Kipyegon. What a race @trackjenny up for silver pic.twitter.com/H4PkpuIJQL

The 23-year-old Olympic champion, McLeod, held off defending world champion Sergey Shubenkov of Russia by a tenth of a second 13.04 as Hungary's Balazs Baki won the bronze medal.

McLeod, the sub-10 runner over 100m, has been also entered in Jamaica's  4x100m relay team along side with great Usain Bolt.

Omar McLeod is the best in the world pic.twitter.com/N0msFVtJq2