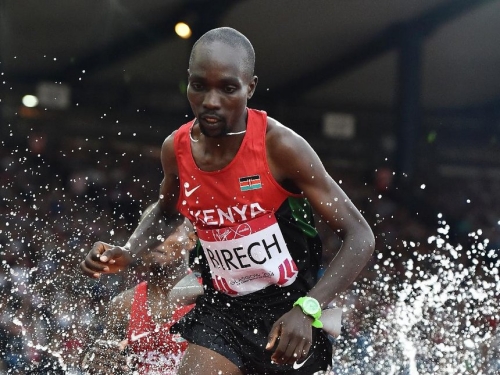 The 24-year-old, Birech, who took 4th place at the 2015 World Championships in Beijing, pulled away from the lead pack at the bell to take a very comfortable victory  in 8:10.11 ahead of his country man Abraham Kibiwott (8:10.62) and Frenchman Benabbad Mekhissi (8:14.67)

Jamaica's world and Olympic games medalist Hansle Parchment clocked 13.49 to win his second 110m hurdle race in two days on French soil. On Friday, June 2 to won the 110m hurdles in Montreul in 13.19 seconds. Parchement skipped most of his 2016 seson due to a hamstring injury.

Godfrey Mokoena of South Africa and Daniel Bramble of Great Britain were the only athletes to surpass the 8.00m mark in the men's long jump. The The 2008 World indoor champion Mokoena leaped 8.07m for the win, while Britain's Bramble with 8.00m settled in second place.

In the women's triple jump Germany's Kristin Gierisch leaped 14.16m for the win.