• Thiam Impresses with 7013 Points in Gotzis 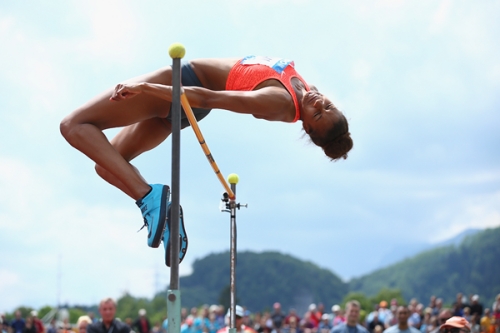 Belgium's Nafissatou Thiam set the 3rd best mark in the history of women's heptathlon at the IAAF multi event challenge the 2017 Hypo-Meeting in Gotzis, Austria on Sunday, May 28.

Despite producing several impressive performances including, world leading 1.98m in high jump, Thiam concluded day one in 3rd, just 6 points behind the leader Katarina Johnson-Thompson of Great Britain. On day 2, Thiam was unstoppable as she broke two personal record in Javelin 59.32m and in the 800m 2:15.24, and won the 2017 Gotzis challenge in a massive national record and WL of 7013 points.

The 22-years-old Rio Olympics champion with 7013 points put herself in the third position in all times lists behind the World record holder American Jessica Joyner-Kersee (7291) and Sweden's greatest heptathlete Karolina Kluft (7032).

The second and third place in the women's heptathlon took Germany's Carolin Schafer with a PB of 6836 while podium concluded Latvia's Laura Ikauniece-Adminina, the world championships bronze medalist with a new national record of 6815 points.   Katarina Johnson-Thompson, who led the event after day one with 6691 points took 4th place.