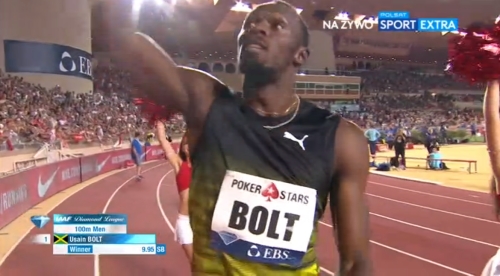 Usain Bolt won the 100m in commanding fashion at the meeting Herculis the IAAF Diamond League meet in Monaco on Friday, July 21.

The 9-time-Olympic champion Bolt broke 10 seconds for the first time this season to win the race in 9.95 seconds.

Monaco was the last race for Bolt before next month's World Athletics Championships to be held in London on August 4 - 13.

One of the first races in Monaco Diamond League was the men's 400m. The World and Olympic champion Wayde van Niekerk of South Africa defeated  Botswana's Isaac Makwala by 0.11 seconds to win the race in 43.73.

South Africa's Caster Semenya managed to win the women's 800m in a new DL record and a new World lead of 1:55.27. Francine Niyonsaba (1:55.47) of Burundi and USA's Ajee Wilson (1:55.61) both broke their national records to place second and third respectively.

A new world leading time was set in the men's 1500m and 800m races. Kenya's  Elijah Manangoi posted a new PB and WL time of 3:28.80 ahead of his compatriot Timoty Cheriuyot who clocked 3:29.10 to take second. Olympic champion Matthew Centrowitz of the United States finished in 9th place in 3:34.43 as defending World champion Asbel Kiprop finished in a disappointing 11th place in 3:34.91.

Emannuel Korir the NCAA champion of Kenya became the new World leader in the men's 800m as he confidently won the two lap race in Monaco with a time of 1:43.10.

Kori Carter (USA) with 53.36 seconds prevailed in the women's 400m hurdles while her teammate Kendra Harrison took the 100m hurdles in 12.51 seconds.