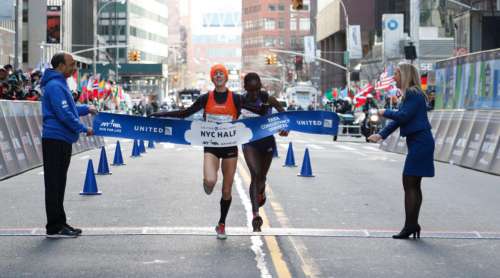 The 2017 United Airlines New York City Marathon will kick off on Sunday, March 19 at 7:00am US Eastern time.

This year's New York City Half Marathon is set to be one of the best as the men's and women's elite races are loaded with high caliber athletes.

Top international stars at this years event are Rio Olympics silver medalist Feyisa Lilesa of Ethiopia with 59:22 PB in Half. Also in the field is defending champion Stephen Sambu of Kenya and Great Britain's surprise runner Callum Hawkins who posted 60:00 for the half in Marugame, Japan on February 5.

The women's race will lead the two time world champion Edna Kiplagat of Kenya with 67:41 PB in half marathon. Kiplagat will be challenged by last years winner USA's Molly Huddle, who holds the same PB as the Kenyan. Also, the women's elite field will have former New York Half Marathon and Boston Marathon winner Caroline Rotich of Kenya.

Despite the recent snow storm in New York, the event organizers are planning on holding the event as scheduled.

The event will be streamed live on Sunday from 7:00am - 9:00am US Eastern. For live streaming and event details visit page here.