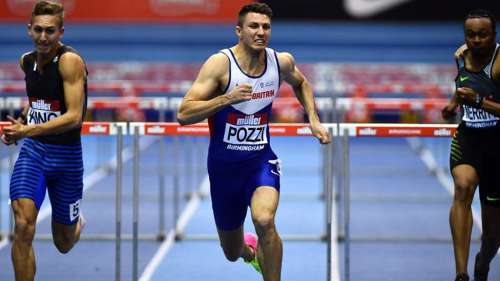 Five European Indoor Champions were crowned on day one in Serbian capital on Friday, (March 3).

Olympic heptathlon champion Nafissatou Thiam of Belgium claimed the the European pentathlon title with the 4th all time score in history of 4870 points. Until the last event the Olympic champion was close to brake the world pentathlon record, however a 2:24.44 performance in the 800m race erased any hopes to beat the 5013 world indoor record mark.

The first European Indoor Champion in Belgrade was Hungary's Anita Marton who took the women's shot put title with a new world leading mark of 19.28 meters.

There was quite drama in the Women's 60m hurdles finals as failure in electronic starting system triggered 3 false starts. Finally with the 4th attempt Germany's Cindy Rolleder clocked 7.88 seconds to beat on the line reigning European indoor champion Alina Tallay of Belarus.

In the men's pole vault final, for the first time either in history of European Championships or World Championships, five men went over 5.80m. In the end, the world season leader and Polish record holder Piotr Lisek claimed the gold by clearing 5.85m on a countback over Konstadinos Fillipidis, who cleared a new Greece record (5.85m) and his countryman Pawel Wojciechowski (5.85m).

There were some big jumps in the men's triple jump qualification round as Germany's 20-year-old talent Max Hess jumped a massive personal best and a new national record and world 2017 indoor best of 17.52m to qualify himself for Saturday's final. A new World junior U20 record  set by Frenchman Melvin Raffin with a massive leap of 17.20m - 2nd in the qualification rounds.

Great Britain's Lura Muir showed very strong performance as she managed to qualify for the 1500m and 3000m finals on the same day.