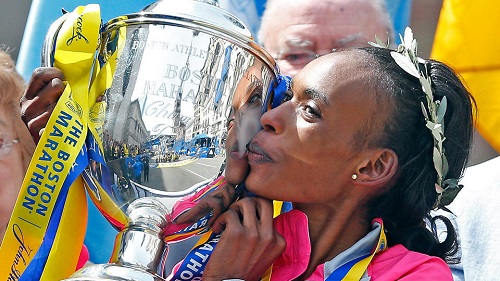 A two year doping ban against Kenyan marathon runner Rita Jeptoo has been doubled by the Court of Arbitration of Sports (CAS) on Wednesday.

Two years ago Jeptoo failed an out of competition test for EPO in Kenya.  The Kenyan Athletics banned the athlete for two years. However the World Track and Field governing body (IAAF) appealed her case to the CAS asking to double her ban.

On Wednesday, just few days before the end of Jeptoo's original ban, CAS ruled to extend her ban for two more years due to aggravating circumstances including Jeptoo's "deceptive and obstructive" behaviour. The 33-year-old Jeptoo will have to pay IAAF $15 000/13 850euros.  The CAS ruling also forfeits Jeptoo's 2014 Chicago and Bosotn marathon titles.

"The panel found to its comfortable satisfaction that the athlete used EPO over a period of time to enhance performance,"CAS said in a statement.

"The athlete provided various differing accounts of the circumstances leading up to the injection and also regarding her relationship with that doctor."

Jeptoo claimed that the illegal substance may have been prescribed at a local hospital after a road accident.