• Aberu Kebede has another crack at the 2:20 barrier in Berlin 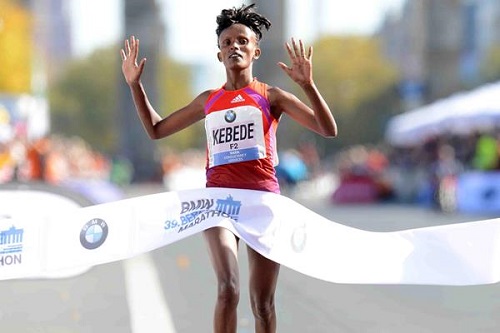 No rival in the women’s field has such as successful record in the BMW BERLIN-MARATHON as Aberu Kebede. The Ethiopian is also unmatched in her knowledge of local conditions as she prepares to contest the most spectacular German road race for the fourth time on Sunday.

Her list of achievements shows two wins and one second place and a third victory would take her level to the women who hold the record number of wins at the BMW BERLIN-MARATHON: Uta Pippig of Germany and Poland’s Renata Kokowska each have three titles to their name. German interest in the elite women’s field centres on Katharina Heinig who will be making her Berlin debut 22 years after her mother won the title.

Berlin has once again attracted a massive turnout with 41,283 runners, 5,445 inline skaters, 185 handbikers and 37 wheelchair competitors while over a million spectators will be expected along the course. The total of participants doesn’t finish there since 10,010 schoolchildren will take part in the Mini-Marathon. The Breakfast Run on Saturday is likely to feature around 11,000 participants and the various Kids Runs and Skating events, also on Saturday, should attract more than 1,500. The BMW BERLIN-MARATHON is Germany’s biggest one-day sports event. It is part of the Abbott World Marathon Majors which brings together the six most important marathons in the world (Tokyo, London, Boston, Berlin, Chicago and New York) and is a IAAF Gold Label race, the highest category of road event awarded by the governing body of world athletics.

The 43rd edition of the BMW BERLIN-MARATHON begins at 0915, the wheelchairs start at 0850 and the handbikers at 0858.
Ethiopia’s top women runners have dominated the BMW BERLIN-MARATHON in the past ten years. While they have won the event six times, Kenya’s women took the event on three occasions. Germany’s Irina Mikitenko is the only non African winner in this period with her German record of 2:19:19 in 2008.

A year ago Kenya’s Gladys Cherono clocked a world leading 2:19:25, beating Aberu Kebede. The Ethiopian finished second with 2:20:48. However it is likely that Ethiopian women will continue their Berlin success story on Sunday.

„I have trained well and hope that this time I will finally break the 2:20 barrier,“ said Aberu Kebede, who won with a time of 2:23:58 in 2010.Two years later she returned to the German capital and improved to 2:20:30, winning the race for the second time. This still remains her personal best. While fellow-Ethiopian Amane Beriso had to cancel her start due to an injury it looks likely that another runner from this country will be the main rival for Aberu Kebede: It will be a first start in Berlin for Birhane Dibaba. „I know about the fast course and the great support from the spectators. Additionally I have heard that the weather is ofter favourable in Berlin,“ said Dibaba, who won the Tokyo Marathon in 2015 and features a personal best of 2:22:30.

National interest in the women’s race focusses very much on the daughter of Katrin Dörre-Heinig. The former world-class marathoner won in Berlin back in 1994 with a course record of 2:25:15. On Sunday her daughter Katharina will run the BMW BERLIN-MARATHON for the first time and hopes for a significant improvement. So far the personal best of the 27 year-old stands at 2:33:56. She may well run below2:30 on the fast course.

New: Entertainment before the Start and Internet Streams
An innovation this year is Sunday’s entertainment programme for participants and spectators in the grandstand before the start. Seven giant video screens will show live pictures from 0715 ranging including stories about the marathon’s history, important pre-race information and all the emotions that go with Germany’s biggest marathon. A live stream (Second Screen) shows the mass runners on the course from midday on www.bmw-berlin-marathon.com. This stream continues on a tape loop on the website after the coverage is finished. “Almost Live” clips on Facebook during the marathon show brief highlights of the race both from the elite as well as the mass field.

The Media Guide for the BMW BERLIN-MARATHON
contains a wide range of information and statistics and is available on the website to download.