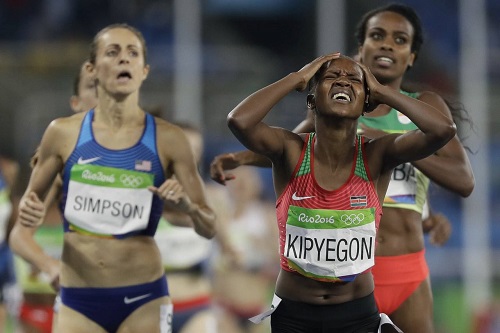 The fastest women in 2016 Kipyegon unleashed a storming 1:57.4 over the last 800m to beat pre-race favourite Genzebe Dibaba.

Jenny Simpson, the 2011 world champion, took bronze and became the first American ever to medal in the women's 1500m at Olympic games, while American record holder Shannon Rowbury finished in 4th place.

After a pedestrian pace over the first 800m Dibaba took the lead clocking a devastating 56.8 seconds over the next lap to stretch out the pack. But the fastest women in 2016 Kipyegon, had more gas left in the tank as she stormed by Dibaba 200m to won the event in 4:08.92. Dibaba came in second with a time of 4:10.27 just 0.26 seconds ahead of American Simpson.

"I needed to focus for the middle because I knew Genzebe is so fast and I really had to kick on the last lap." Kipyegon told reporters after the race.