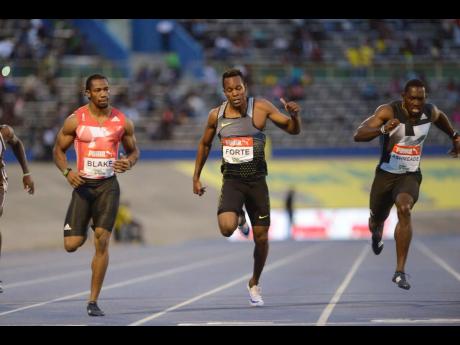 Yohan Blake successfully completed the sprint double at the Jamaican Trials by cruising to a comfortable win in the men's 200m final on Sunday.

After winning the 100m on Friday, the Olympic silver medalist, Blake, clocked 20.29 seconds into negative -1.5m/s headwind to win the 200m ahead of Nickel Ashmeade, who crossed the line in 20.45 seconds. Meanwhile the third place with a time of 20.45 seconds took Julian Forte.

"I know I was working really hard in training and I just needed to get the race out of the way early, so I just relaxed and took it home, given that the wind was against me," Blake told reporters after the race.

Simone Facey punched her ticket to Rio after she took prevailed in the women's 200m  final in 22.65 into big headwind of -3.1m/s. Legendary Veronica Campbell-Brown, also earned her  place to Jamaican Olympic team by taking second place in 22.809 seconds with Kali Davis-White in third in 22.94 seconds.

Javon Francis took down talent stacked men's 400m final field with a time of 44.95 seconds. Fitzroy Dunkley came in second in 45.35 seconds with Nathon Allen in third in 45.52 seconds.