• Rotich wins as Rudisha Fades to 4th in Stockholm 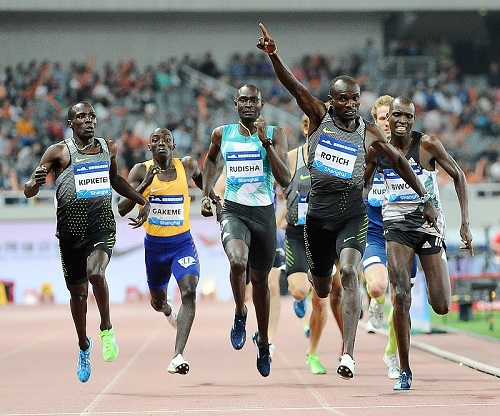 Kenyan runner Ferguson Cheruiyot Rotich powered to his second Diamond League victory this year by claiming the men's 800m in Stockholm on Thursday.

The 26-year-old Rotich, who finished just outside the podium at last year's world championships,  with a strong finish took the men's 800m field in 1:45.07.  Meanwhile reigning world and Olympic champion David Rudisha struggled to  finish in fourth place as he was beaten by Pierre-Ambroise Bosse of France and Poland's Adam Kszczot. After his first place  Shanghai and second in Eugene Rotich is a clear leader the Diamond Race.

After nearly 6 years of absence, the local star Susanna Kallur returned to track by taking fifth place in the women's 100m hurdles in 13.00 seconds. The world record holder in 60m hurdles indoors, Kallur, was out from sports for many years after she struggled to recover from a leg injury . Kendra Harrison won the women's 100mm hurdles clocking 12.66 seconds.

Ihab Abdelrahman prevailed in the men's javelin competition with a big throw of 86.00m over Germany's Thomas Roehler, who threw 85.89m. Reigning world champion Julius Yego of Kenya concluded the podium with a throw of 83.89m.

In the women's long jump the 2-time world championships medalist Ivana Spanovic of Serbia leaped 6.90m to defeat world and Olympic champion Brittney Reese of the United States by 2cm.

Sandra Perkovic dominated the women's discus throw again  a massive throw of 68.32m in final round.

Renaud Lavillenie topped the men's pole vault conest with a mark of 5.73m. The world record holder Renaud Lavillenie almost took last place as he barely made it over 5.65m height with his third attempt.

The poor weather conditions with constant drizzle and cold temperatures were major factors that stopped athletes from achieving world class results in Stockholm.

The next Diamond League series will take one month brake as the next competition will take place in Monaco on July 15.