• Bracy defeats Bromell in the 60m at USA indoor championships 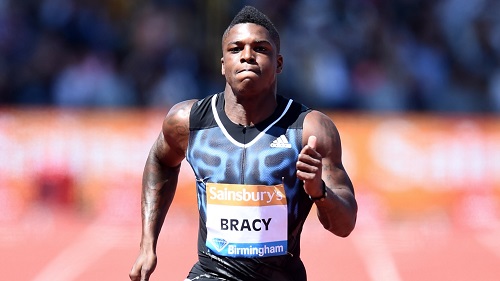 Bracy came out undefeated from these championships  as he managed to also win the preliminary rounds.

In the 60m final Bracy narrowly beat the world 100m bronze medalist and this race favourite Trayvon Bromell with a new season's best  time of 6.51 seconds. The photo finish showed that the runner-up Bromell only 0.005 seconds slower than Bracy. Bracy and Bromell are going to next week's world indoor championships as one of the favorites. Jamaica's sprint star Asafa Powell holds the world indoor lead of 6.49 seconds. Watch Video.

The 18-year-old Vasthi Cunningham was one of the stars on the second day of the 2016 US indoor champs as she took the national title in a very  impressive personal best of 1.99m. The mark is a new world junior and US high school record and the best this year in the world indoors.  Video here.

Quanera Hayes set a new world indoor lead at these championships afters she crossed the line in 51.09 seconds.

Massive world lead of 7.76 seconds posted Brianna Rollins for the win in the women's 60 hurdles final. Kendra Harrison, who took second posted the second fastest time in the world, while Queen Harrison with a time of 7.83 seconds (#3 in the world) completed the podium.

Olympic long jump champion Brittney Reese added 8cm to her season's best to take the US title with a leap of 6.89m on her first attempt.

Vernon Norwood took the men's 400m national title with a mark of 45.80 seconds.

2-time world outdoor championships medalist Matthew Centrowitz outkicked everyone in the last lap to win the 1500m in 3:44.33. Brenda Martinez was the fastest in the women's 1500m race with a time of 4:08.37.