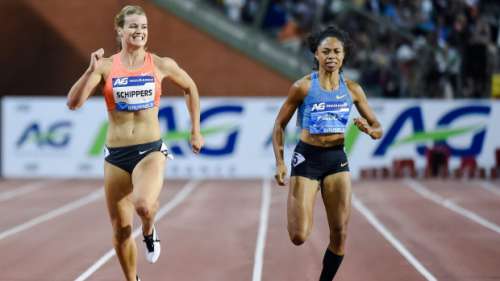 Coming off the bend the 4 time Olympic champion Felix had about 3 meters lead, but the the 23-year-old Dutch sprinter  with a powerful final 40 metres managed to pass by the American.  Jamaican world championships 200m silver medalist Elaine Thompson took third in  22.26.

"Beating the Olympic champion – I didn't know that it feels so good. A few weeks ago I ran eight races in a few days and that shows.

"But I felt that I could give power after the curve, so that is what I did. You never know what the others can do, but I felt strong and felt I could take the win." Said Schippers after the race.

There was another African record broken byTunisia´s Habiba Ghribi  who won the 3000m steeple in 9:05.36. It was also the fastest time this year in the world and new meeting record.