Peres Jepchirchir gave ample proof of her status as a rising star among the distance events by running 30:55, the fastest time in the world for the women’s 10k, to take top honours and break the course record at the Birell Prague Grand Prix. Her solo run from the gun secured the 21-year-old her most impressive career win on the road. Her fellow Kenyan Linah Cheruto finished second in 32:08 while Ethiopia’s Kidsan Alema was third in 32:10. Daniel Chebii was also impressive in winning the men’s crown for the second time in three years, running 27:42, the third fastest performance in the world this year, to beat fellow Kenyan Gilbert Masai by three seconds with Barselius Kipyego a further second behind. The Birell Prague Grand Prix is one of the seven events in the RunCzech series and an IAAF Gold Label race, the top category of road race. 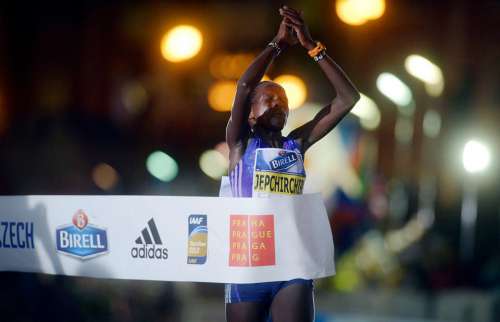 The 20th edition of this spectacular evening race in the heart of the Czech capital was given a distinguished send-off when the former world record holder in the decathlon, Roman Sebrle, fired the starting gun in Republic Square. Peres Jepchirchir didn’t waste time, deciding to attack from the start and within three minutes was clear in front and running strongly. She had run 31:18 for 10k in Ottawa onMay 23 which had followed an impressive second place at the Kenyan National Cross Country Championships last year, so her pedigree was not in doubt.
“When the gun went off I felt confident after my run in Canada and decided to attack my personal best.” She proved relentless in windy conditions, pressing home her advantage on a mostly flat course which proved an ideal stage for her aggressive running. Her closest pursuers proved to be fellow Kenyan Linah Cheruto and Ethiopia’s Kidsan Alema. Cheruto, another young talent, had shown excellent form to finish second in a personal best of 70:22 at the Mattoni Karlovy Vary Half Marathon in June, another of the RunCzech events. But she trailed home 13 seconds behind as Peres Jepchirchir celebrated going to the top of the world charts for the women’s 10k, displacing Gladys Cherono of Kenya’s time from the Ottawa event by just one second. For good measure, Jepchirchir improved the course record by ten seconds. Peres Jepchirchir has set her sights on qualifying for the Kenyan Olympic team at 10,000m in Rio de Janeiro next year, though she has a short term goal of achieving another win in the final event of the RunCzech series at the Mattoni Usti Nad Labem Half Marathon next Sunday, September 13. Daniel Chebii had struggled with injury for much of last year. The 2013 winner of this event is also mourning his manager Zane Branson, whose recent sudden death in Kenya has been deeply felt by many in the world of distance running. The Kenyan admitted that training had since been difficult but summoned his resolve to produce one of his finest races. Always well placed just behind the front rank of a men’s leading group which had been reduced to eight after halfway, Chebii looked consistently stronger than the defending champion and fellow Kenyan Geoffrey Ronoh, who showed dominant form to break the course with 27:28 last year. After a brief exchange of the lead with Gilbert Masai and Barselius Kipyego, Daniel Chebii made the decisive break with one kilometre remaining. He crossed the line in 27:42, the third fastest time in the world this year. The overall quality of the men’s race was high as Masai edged Kipyego for second place and a total of seven men breaking 28 minutes. Reflecting on his two wins in this event, Daniel Chebii was in no doubt which he valued most: “The competition this year was much tougher than two years ago. This was a victory I appreciated much more.”  It will be daunting for his rivals to hear that Chebii reckons he is only 70% fit at present, continuing to recover from the injuries which hindered his progress last year. But his path to fulfilling his potential in the marathon, his ultimate goal, looks bright. Men’s Results: 1 Daniel Chebii – Kenya – 27:42 2 Gilbert Masai – Kenya – 27:45pb 3 Barselius Kipyego – Kenya – 27:46pb 4 Japhet Korir – Kenya – 27:48 5 Teshome Mekonen – Ethiopia – 27:50pb 6 Bernard Bett – Kenya – 27:52pb 7 Evans Kigen – Kenya – 27:56 8 Geoffrey Ronoh – Kenya – 28:09 Women’s Results: 1 Peres Jepchirchir – Kenya – 30:55pb 2 Linah Cheruto – Kenya – 32:08pb 3 Kidsan Alema – Ethiopia – 32:10 debut 4 Shitaye Eshete – Bahrain – 32:11 5 Viola Jelagat – Kenya – 32:37 6 Caroline Kilel – Kenya – 32:53 Further information about the Birell Prague Grand Prix can be found online: www.runczech.com
Top videos