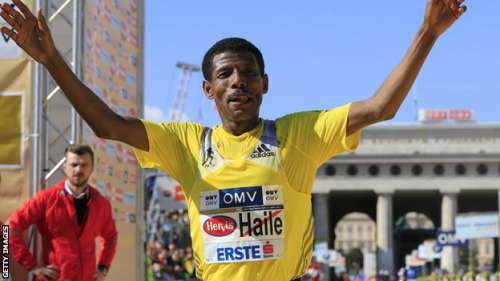 Gebrselassie in his final competetive race in Manchester posted a time of 30.05 over 10km to finish in 16th place.

“I’m very happy to stop here. I knew this was going to be the last one. I’m retiring from competitive running, not from running,” he said to BBC Sport after the race in Manchester on Sunday.

In november of 2015 Haile Gebrselassie reversed his decision to retire from sports. The Ethiopian announced his intention to retire after pulling out of the 2010 New York marathon with 15 km remaining due to a knee injury but later he changed his mind afterwords.

In his career the 42 year old Ethiopian won 2 Olympic golds,  4 Outdoor championship gold medals, 4 world indoor championships golds and 1  world half marathon title. He broke world records in events from 5000m, 10000m and up  to marathon total of 27 times.

Not only Gebrselassie was famous for his uncountable achievements, but also for his enormous positive attitude and smile he expressed to people where ever he would appear.

“You cannot stop running, this is my life.” Smiling Gebrselassie added.

In the same race on Sunday Bernard Lagat clocked 27:48 and  broke Gebrselassie's wolrd masters record of 28:00.