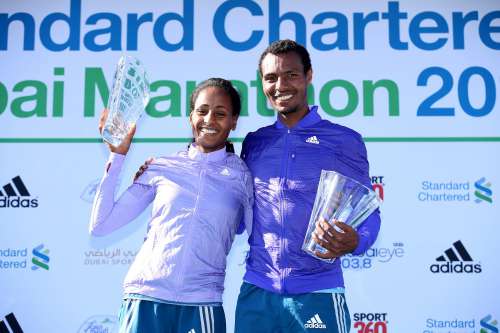 Lemi Berhanu is the unexpected champion of the Standard Chartered Dubai Marathon. It was not a debutant’s triumph as in the past three years but it was definitely a spectacular surprise. With the triple Dubai champion Haile Gebrselassie on duty as part of the commentary team for international TV coverage his fellow Ethiopian Berhanu left some of the biggest names in long distance running trailing. In fine but relatively warm weather conditions the 20 year-old clocked a world leading time of 2:05:28. Lelisa Desisa, the Dubai and Boston Marathon Champion of 2013, took second in 2:05:52 while Deribe Robi completed the all Ethiopian podium with a time of 2:06:06. Ethiopia’s superstar Kenenisa Bekele dropped out beyond the 30 k mark, appearing to suffer from a leg injury.

Meanwhile Aselefech Mergia produced a perfect comeback, winning the most thrilling finish in the history of the Standard Chartered Duabi Marathon. The Ethiopian, who had taken time off competition to have a baby, returned to the marathon for the first time since the summer of 2012, winning in 2:20:02. In a duel right to the line the reigning World Half Marathon Champion Gladys Cherono was beaten by just one second in her superb marathon debut. Fellow-Kenyan Lucy Kabuu was third in 2:20:21. The first ten women ran under 2:24. Both winners earned 200,000 US Dollar, the highest prize money available in marathon running.

A record field of 25.000 runners entered the event, which included shorter races as well. 3.000 of them were running the marathon. The Standard Chartered Dubai Marathon is an IAAF Gold Label Road Race.

It was only during the first part of the race that the men were running as fast as planned. Split times of 14:39 for 5 k and 29:22 pointed towards a sub 2:04 finish time. However the pacemakers could not hold the pace and when a group of 15 runners reached the 25 k mark in 1:13:57 none of them was left in the race.

Five more runners lost contact during the next five kilometres, among them Kenenisa Bekele. It was then Lelisa Desisa who surged ahead at the 30 k point refreshment station to take his bottle. The Ethiopian kept going and five fellow countrymen went with him: Deribe Robi, Sisay Lemma, Feysa Lelisa, Girmay Birhanu and Lemi Berhanu. Five kilometres from the finish a duel between Lelisa Desisa, who was second in New York in November last year, and Lemi Berhanu developed. It was then Berhanu who was able to drop the much more experienced Desisa with just around one kilometre to go.

“I would never have thought that I could win this race. It was my dream to do this in Dubai one day, but not this year! With around one kilometre to go I sensed that I could succeed,” said the youngster, who had won his debut race in Zurich last year with 2:10:40. He has now improved by more than five minutes and is unbeaten in two races. “If my federation selects me then I would really like to run the marathon in the World Championships in the summer,” said Berhanu, who said he had no idea what to do with the prize money of 200,000 Dollar. “I never thought about the money. I really don’t know what I will do with it.”

Meanwhile Dubai proved a tough marathon experience for Kenenisa Bekele. After he won his debut in Paris last April with 2:05:04, finishing fourth in Chicago in 2:05:51 was a disappointment for the 5,000 and 10,000 m world record holder. Dubai brought further misfortune. Bekele ran in the lead group up to the 28 k point. But then he dropped back quickly and finally stopped beyond the 30 k mark.

“Kenenisa suffered of hamstring problems in both legs,” his coach Renato Canova later explained what happened. “But I think the real problem is in his right Achilles tendon. At the end of November he had to reduce training because of this. But then it got better and actually his final training sessions looked encouraging. A world record was never a realistic target, but a 2:04 time seemed realistic. However when I saw him running today he did not look relaxed, he looked tight. And I think this is the reason why he developed hamstring problems. Something must have happened in the final few days before the race,” said the Italian coach. “We now have to solve this tendon problem. But for his future marathon career I remain very confident. I think he will do really well.”

Women’s Race: Hat-trick for Mergia after Tufa startles the field

The strongest women’s field ever in Dubai produced its own share of drama. Firstly the little known Tigist Tufa, Ethiopian-born and running for Bahrain, broke clear shortly after the start. Was this a quest for fleeting glory or a genuine stroke of audacity? The latter appeared to apply since she maintained a daunting pace, leading a talented chasing group by a solid minute at 20k, reached in 1:05:23 which suggested a 2:18 finishing time.

Tufa arrived in Dubai with pedigree, having run 2:21:52 to win the Shanghai title as recently as last November. She did pay the price in the end, caught by the pack at 34k. That group comprised Aselefech Mergia, returning to racing after maternity and in search of a third Dubai title, fellow Ethiopians Aberu Kebede and Shure Demissie along with the Kenyan duo of Lucy Kabuu, runner-up to Mergia three years ago, and the 2014 World Half Marathon champion Gladys Cherono, making her debut at the distance.

The group was reduced to three with just over three kilometres remaining. For all the Ethiopian numerical dominance on the start lists, Aselefech Mergia had Lucy Kabuu alongside with Gladys Cheron completing the triangle behind them.

Cherono had dangerous finishing speed over the shorter distances in her armoury but it was Mergia who won a contest which ran right to the finish line, completing a hat-trick of Dubai titles by just one second.

Watched by her husband and baby daughter, the marathon bronze medallist from the 2009 World Championships reflected on her determination to regain top form after maternity:

“I told myself after having my daughter that I could win a marathon again. We used the prize money from my first two wins in Dubai [2011 and 2012] to begin building a hotel back home, now we’ll be able to complete the job,” said Aselefech Mergia. Beaten by just one second for the $200,000 first prize, Gladys Cherono has earned the right to be considered a true marathoner after such a resolute debut. Her fellow Kenyan Lucy Kabuu maintained her fine record in Dubai, finishing third after her second place to Mergia’s course record of 2:19:31 in 2012.

The defending champion Mulu Seboka of Ethiopia finished sixth and the Belarussian record holder Aliaksandra Duliba once again ran consistently for eighth place. Turkey’s Sultan Haydar was another to enjoy a day of achievement, breaking her own national record by 25 seconds. 12 women broke 2:25, another reflection of the calibre of the women’s field.


Results with BIBs and Prize Money