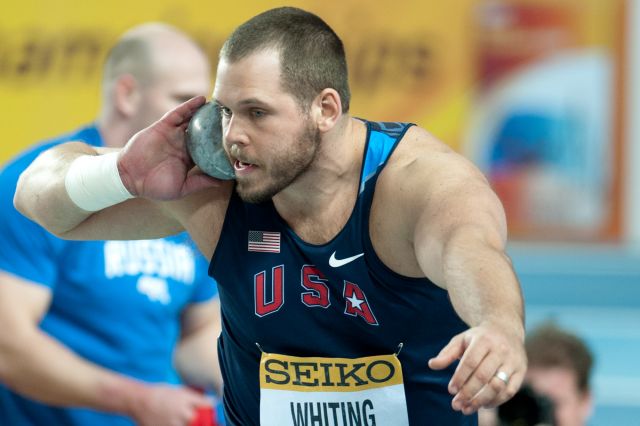 Whiting warmed up with a throw of  19.90m in the first throw and from there he just got better by adding almost meter and a halfin second attempt 21.33m. The 27 year old shot putter finally hit the big throw of 22.23m in the fourth round leaving others with no hopes for the title.

''I knew I was on my way up,'' Whiting said. ''I just threw better than everybody else. I'm a lot stronger than I was last year. I'm a lot more ready. I'm just getting stronger and I think that just comes with the age.''he said.

Also impressive performances produced Kurt Roberts and Joe Kovacs, who were behind whiting taking second and third place. Roberts put down a mark of of 21.50m while  Kovacs tossed 21.46m respectively.

''It just happened that you had to throw far to be able to do it,'' Whiting said. ''I had been doing some things wrong and I tried to fix it the last few meets. The other guys have proved that no mark is safe in U.S. shot putting.''Whiting told ca.sports.com.

Whiting have been sitting on top of the world's indoor list since January 31 when he tossed 21.37m at the international indoor meeting in Bydgoszcz, Poland and by far he is the favorite to win the world indoor title again.

Defending World Outdoor Champion, Germany's David Storl, is going to be one to watch out for, as he had proved to do his best when it really matters, in this case it's going to be in Sopot next weekend.

"Mentally, I'm a lot more ready," Whiting said of his chances of a world title repeat. "There's no reason I can't be a contender."  Whiting confidently said.