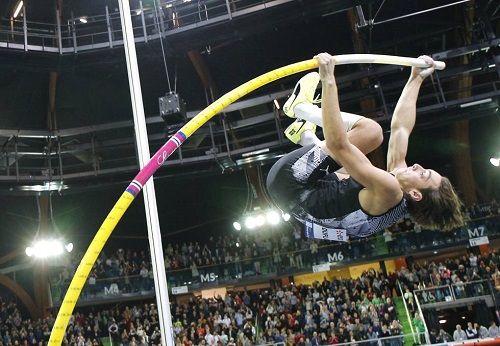 Armand “Mondo” Duplantis won the men’s pole vault with 6.07m with the greatest ease at the Meeting Hauts de-France Pas de Calais in Lievin before coming close to breaking his world record at 6.19m in his second attempt.

The 20-year-old Swede cleared the 6 metres barrier in all his four competitions this winter after winning in Dusseldorf with 6.00m and setting two world records in Torun with 6.17m and Glasgow with 6.18m. Sam Kendricks cleared 5.90m at his third attempt. Ben Broeders set the Belgian record with 5.80m.

“I like it when people are watching. I like it when the eyes are on me, when the eyes are on our pole vault competitions, because we do some really special things out there on the track, especially as pole vaulters. I really felt the crowd’s energy. This event is really special. I don’t think sport will ever have such a situation again”, said Duplantis.

World Indoor bronze medallist Ronnie Baker cruised through to an impressive win in the 60m final in 6.44 setting the meeting record and the second fastest time in the world this season behind Christian Coleman’s 6.37 in Albuquerque last weekend. Baker had clocked 6.49 in the heat. US Demek Kemp finished second with 6.50 ahead of European Indoor champion Jan Volko from Slovakia (6.57) and US Mike Rodgers (6.59). Italian 100m champion Marcell Jacobs improved his PB by 0.04 with 6.63.

Kenya’s Collins Kipruto clinched the win in the men’s 800 metres in 1:46.34 holding off his compatriot Cornelius Tuwei (1:6.74) and South Africa’s Tshepo Tshite (1:47.75). Slovenia’s Marusa Mismas set the world record in the rarely contested indoor 2000m steeplechase race with 5:47.79 beating Kenyan runners Mercy Chepkurui (6:00.31) and Roseline Chepngetich (6:01.27). Mismas won the European Under 20 silvermedal in the 3000m steeplechase in Rieti 2013 and reached the World Championships final in Doha 2019.

In the final race of the meeting Pierre Ambroise Bosse won the 1000m race in 2:19.26 holding off Andrew Osagie from Great Britain by 0.05.