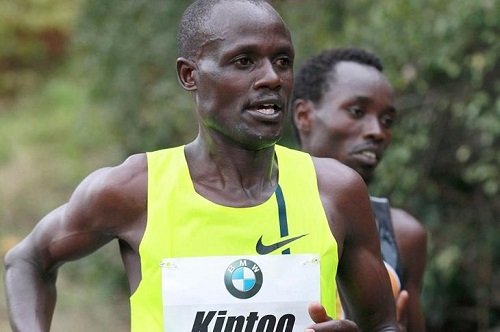 Mark Kiptoo and Katharina Steinruck know that the Mainova Frankfurt Marathon on Sunday is the most important race of the year in pursuit of their respective goals.

The Kenyan Masters world record holder and the leading woman runner among the home contingent aim to exploit the Frankfurt course, renowned for its fast times. Last year Kiptoo, now 43, ran 2:07:50 for a M40 world record and he says he feels capable of improving on that time. Katharina Steinruck has shown excellent form this year after heel surgery and her eyes are on the qualifying time of 2:29:30. Her personal best is currently 2:28:34, set three years ago.

Around 14,000 runners are expected on the startline for the Mainova Frankfurt Marathon which is an IAAF Gold Label race, the highest category of road race. It is still possible to enter during the Marathon Expo on Friday and Saturday. Further details can be found at: www.frankfurt-marathon.com

Mark Kiptoo credits his longevity with a disciplined attitude not only to training but also his life in general: “What we put into our body, is what will come out. So the training we have been doing means I have confidence the body is capable of going through halfway in 62:30.” That level of performance would put the 43-year-old on course for a major improvement on his age group world best.

Kiptoo’s story may well give other late developers hope, though not everyone perhaps has the ability at his level: “I am sure that the reason why I can run so fast these days is because I began late as a runner. It wasn’t until I was 28 that I realised I had talent.” He made his marathon debut at 37 after a solid career on the track and cross-country.” His preparation has gone flawlessly: “The key is that I don’t have any physical problems and have also been able to do good speedwork sessions. Age is only a number.” His personal best of 2:06:00 goes back to his pre-Masters days.

Frankfurt has been a happy hunting ground for the runner from Eldoret. He made his marathon debut here in 2013 with second place in 2:06:16, just one second behind the winner. A year later he won, aged 38, in 2:06:49, then came last year’s age group world best.

Everything points to Katharina Steinruck being in excellent form before she attempts to run the Olympic qualifying time of 2:29:30. After heel surgery in November 2018 she has set a clutch of personal bests recently which have put her on the right course: “I wouldn’t say I am in the form of my life but there has been a clear step forward.” In preparation for the marathon Steinruck has run personal bests of 32:39 for 10km and 1:12:23 for the half marathon. „The Olympic qualifying time is of course my number one goal. However I am also looking for a personal best. To run sub 2:28 would be a dream come true.“