• Pole Vaulters Kendricks, Duplantis and Lisek among the early headliners for the ISTAF in Berlin 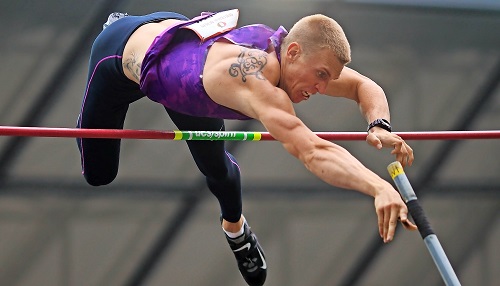 As the countdown continues for the World Championships in Doha at the end of September, the 78th edition of ISTAF, the world’s oldest track and field meeting, has outstanding talent on display as the organizers announced the competitors so far confirmed for Berlin’s Olympic stadium on Sunday, September 1. The ISTAF is an IAAF World Challenge Meeting.

Vivid memories of last year’s European Championships in Berlin should be revived in the men’s pole vault. Armand Duplantis of Sweden, now 19, cleared 6.05m to break the world junior record and the Championship record. Returning to the fray will be Piotr Lisek, having improved the Polish national record to 6.02m this season, eager to improve on his fourth place at those European Championships. Two more athletes who have cleared six metres will compete in what could be a fascinating dress rehearsal for the World Championships: Sam Kendricks, the reigning world champion and US record holder with a current world lead of 6.06m, and Timur Morgunov (Russia/Authorised Neutral Athlete). He took silver in the European Championships last year with a PB of 6.00m. The German challenge in the vault includes Torben Blech, this year’s World Student Games silver medallist and the 2013 World champion Raphael Holzdeppe.

The Meeting Director Martin Seeber is confident that the men’s pole vault will be a prime event and among many events to excite Berlin’s track and field fans with the added incentive of the forthcoming World Championships: “The thrilling pole vault last year was one of the pinnacles of the European Championships. I am delighted that in Sam Kendricks, Armand Duplantis and Piotr Lisek we can present the world’s top three. The pole vault will be a true highlight. With four weeks to go before the World Championships, all the athletes will be on top form. And it’s going to be exciting for the fans to see how Germany’s best athletes perform against these international stars.”

The top performer in the women’s long jump this season, Malaika Mihambo, returns to the scene of her triumph in the European Championship last year. The German, leading the world rankings with 7.16m, faces tough opposition from the 2012 Olympic silver medallist Yelena Sokolova (Russia/ANA). Also coming into contention thanks to outstanding form this season is Nigeria’s Ese Brume. The African champion set her PB of 7.05m at the Turkish Championships on August 4.

The presence of Germany’s 2016 Olympic discus champion Christoph Harting is guaranteed to rouse home support as he takes on the World and European gold medallist from Lithuania, Andrius Gudzius. In the sprint hurdles Pascal Martinot-Lagarde of France returns to the track where he won European gold last year, as does Belarussian Elvira Herman in the women’s event.

The German men’s javelin throwers have strength in numbers and top quality in the shape of the reigning Olympic and European champion Thomas Roehler, whose best of 93.90 was set in Doha in 2017. He says that he still has a score to settle in Berlin: “I still haven’t thrown 90 metres in the Olympic Stadium and I want that.”

On the track, Germany’s European steeplechase champion Gesa Felicitas Krause will race over 2,000 rather than the usual distance of 3,000m, having set the national record of 6:04.20 at the 2015 edition of ISTAF. In what should be an ideal tune-up for the World Championships, Krause’s rivals include the current world number two at the event, Viktoria Wagner-Gyuerkes of Hungary.

Martin Seeber as Meeting Director looks forward to announcing more stars as the fans’ anticipation sharpens for the climax of the track and field season: “We are delighted that so many top national and international athletes have agreed to compete at ISTAF. There will be more to follow. Track and field athletes inspire the fans. It is going to be exciting to see how Germany’s best perform against stars from around the world. The deadline for the World Championships closes a few days after ISTAF. The stars are going to give it all they’ve got, for some ISTAF will perhaps be their last chance to grab a trip to the World Championships. We’ll shortly be deciding what other events we can add to the schedule. With the fantastic Berlin fans we want to turn the 78th edition of ISTAF into a World Championship turbo-charger for the athletes.”