• Rachik is leading in EuroHeroes Challenge; Hawkins wants to break the Italian dominance 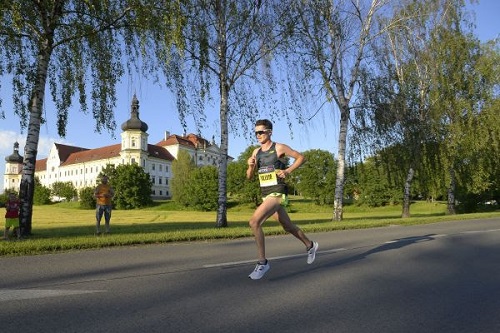 This year’s EuroHeroes Challenge has been awash with first-rate performances. Celebrating its 10th anniversary, the 2019 Mattoni Olomouc Half Marathon on 15th June is set to step things up a notch further with some fresh faces capable of incredibly fast times. Spectators are already looking forward to this amazing spectacle and ready to witness a number of battles play out among the series leaders.

It’s looking like a truly stylish birthday celebration. Britain’s number 2 long-distance runner, sixth fastest European in history and currently placed third on the active athletics rankings, Callum Hawkins is coming to the capital of the Haná Region. With an excellent build and fast legs, he’s able to make it across the finish in under 1 hour. The runner took part in the Rio Olympics while also boasts two gold titles from the team competition at the European Championships and a bronze from the European Championships. He is the first British athlete in seven years to have managed to beat his compatriot Mo Farah. This was at a cross-country race, however where Mo Farah’s performance was below par, and which saw him take seventh place. His current Label Time (best performance over the past three seasons) stands at 1 hour and 1 minute.

Joining Hawkins at the start line of this big half marathon party in Olomouc is another excellent athlete who has proved unstoppable in the EuroHeroes Challenge so far. Twenty-five year old Italian runner Yassine Rachik triumphed in Karlovy Vary and then went on to reign supreme in České Budějovice. And to top it off he managed to score a new European race record. Other accolades include picking up a bronze medal from the 2018 European Championships in Berlin and a ninth place finish at this year’s London marathon, where his most current rival Hawkins was just a few steps behind him.

The organisers have also upped the competition by inviting a number of other top half marathon names to add to the EuroHeroes Challenge mix. Italian runner Ahmed El Mazoury has already won half marathons in Monza and Milan and is capable of completing the distance in an impressive 1:02:39. Just one second behind him and a definite victory contender is Spanish runner Camilo Raul Santiago whose best time was recorded on home soil in Valencia. Irish professional runner and physician Paul Pollock will surely also want to leave his mark, currently occupying third place in the Challenge ahead of Mykola Lukhymchuk who will not be competing this time around. French runner Piere Couzinier will be running his half marathon debut.

Hawkins and Rachik will face a high calibre rival in Ukrainian runner Roman Romanenko. The lean runner has taken on half marathons in Karlovy Vary as well as České Budějovice and will be coming to Olomouc to continue the EuroHeroes Challenge. He won last year’s Mattoni Karlovy Vary Half Marathon and managed second place this year. He also boasts silver medals from the 2018 and 2019 Mattoni České Budějovice Half Marathons. Romanenko manages to maintain solid performance levels though his best time was recorded in 2017 back in Ukraine’s Bila Tserkva (1:03:22).

Leading the women’s field and keen to snatch her third victory in a row is Moldovan representative Lilia Fisikovici. Similarly to Rachik among the men, she reigned supreme at races in Karlovy Vary and České Budějovice and is currently topping the EuroHeroes Challenge rankings. Albeit shorter than in 2019, she also won last year’s premiere season. Of those taking part, she boasts the strongest finishing time (1:10:45).

She will, however, face competition from twenty-nine year Scottish runner Stephanie Twell, whose personal best time hails from this year in London (1:11:33). Back in 2008 she was dubbed a rising star on the European athletics scene and went on to represent Great Britain at the Commonwealth games in 2010 and 2014. She boasts a bronze in the 5 000 metres race from the 2016 European Championships held in Amsterdam.

Belarusian long-distance runner Maryna Damantsevich competed at the Rio Olympics. Her personal best time also hails from Poland. She may well run alongside fellow compatriot Katsiaryna Karneyenka who picked up 5th place this year in Poznan, having previously finished third at a race in Altöning. Meanwhile, boasting a personal best of 1:14:03 recorded in the Austrian city of Klagenfurt, Croatian runner Matea Parlov is sure to also have her sights set on the top prizes.

When it comes to the Czechs, Jiří Homoláč will be keen for a spot on the podium as well as to shave some time off his 1:03:23 time from this season. The field of top Czech runners also includes Vít Pavlišta, this year’s marathon champion as well as České Budějovice’s David Vaš.

A battle is also likely to play out among several Czech women. Native from the city of Ostrava, Petra Pastorová will be looking for another victory. However she’ll face competition from local runner Petra Kamínková who will be running on home turf. Others to watch out for include Olymp Brno team member Tereza Ďurdiaková who is capable of running very similar times. Twenty-three year old Hana Homolková from Nové Město na Moravě may also have a few surprises up her sleeve on the day.