• Caster Semenya Can Compete in Any Event After Swiss Court Ruling 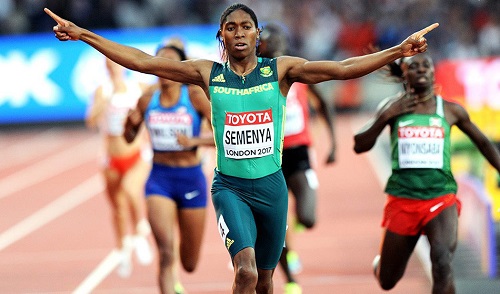 Caster Semenya, the 800m Olymipic champion is cleared to compete in any distance after a Swiss Court suspended the IAAF ruling that prevented her from racing the 800m.

“The court today ordered the IAAF to suspend immediately the implementation of the regulation with regard to Caster and has given the IAAF until the 25th of June to respond to the suspense of effect,” Semenya’s lawyer Greg Nott to a 707 South African radio station on Monday.

"We brought an application for suspension of the regulations which today we learnt was successful."

"The Swiss Supreme Court has granted welcome temporatry protection to Caster Semenya. This is an important case that will have fundamental implications to human rights of female athletes." Swiss counsel Dr. Dorothee Schramm said.

"I hope following my appeal I will once again be able to run free," Semenya said.

"I am thankful to the Swiss judges for this decision."

The Swiss Court rulling means that Caster Semenya who was affected by the 'Eligibility Regulations for the Female Classification for athletes with differences of sex development',  will not need to take testosterone-reducing medication to compete.

The IAAF ruling would have affected women competing from 400m to the mile.

Semenya, didn't race the 800m at last week's Stockholm Diamond League because she has said she will not take medication to lower her testosterone levels.