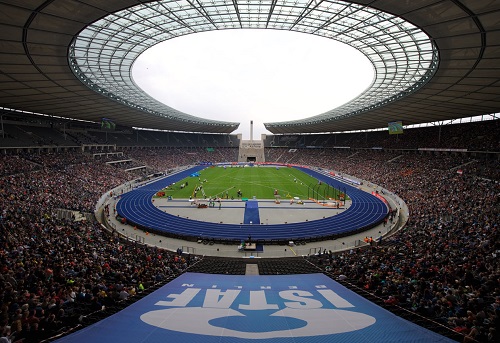 Germany’s Olympic Javelin Champion Thomas Röhler is the first athletics star committed to the ISTAF, which will be staged on September 1. The gold medallist from Rio 2016 returns to the Olympic Stadium, where he achieved two major victories last year. He clinched the European title in August and then won the ISTAF. Germany’s major athletics meeting, which is part of the IAAF World Challenge Series and will see its 78th edition, has been honoured by the international athletics federation with the „IAAF World Athletics Heritage Plaque”. This was announced recently by Sebastian Coe, the IAAF President. The ISTAF is the world’s oldest athletics meeting. Tickets for the ISTAF can be bought online at: www.istaf.de

Traditionally the ISTAF is one of the last major events of the athletics season. However this year the situation is different. With the late World Championships in Doha starting at the end of September Berlin’s ISTAF provides a perfect opportunity for world-class athletes to test their form a few weeks before the climax of the season. This can well produce some extraordinary performances.

The men’s javelin has been a highlight of the ISTAF in recent years. While the full programme still has to be determined the javelin is a must for Meeting Director Martin Seeber. Germany’s throwers have won all major gold medals in the past three years, with Johannes Vetter taking the World Championships’ gold in 2017. He also won the ISTAF two years ago and is expected to return to the Olympic Stadium on September 1. Currently fellow-German Andreas Hofmann heads the world list and Bernhard Seifert is third.

„It will once again be our aim to have the best German athletes on show and they will be up against world-class opponents. We look forward to a true dress rehearsal for the World Championships and for some athletes the ISTAF might be last chance to qualify for Doha,“ said Martin Seeber, who hopes to boost ticket sales with a new initiative. ISTAF organisers have started to support a regional athletics event and hope to add more meetings in future.  The international pole vault meeting in Wittenberg marks the start of this initiative on July 20. Time and again the ISTAF drew the biggest crowd of any single day athletics meeting worldwide. Last year 45,500 spectators watched the ISTAF in the Olympic Stadium. So far already 26,000 tickets have been sold.

The ISTAF and the ’Weltklasse Zürich’ are the first one-day meetings which received the new ’IAAF World Athletics Heritage Plaque’. „The recipients we honour have each made an enormous impact in the historical development of the sport of athletics in their countries and beyond,” said IAAF President Sebastian Coe. „We launched this new award last December and a public competition has since designed the plaque. Next year we will begin to unveil the plaques, permanent reminders of outstanding historic athletic achievement, in prominent locations around the world.” In Berlin it is planned to fix the plaque to the Olympic Stadium.

„This award is a big honour for everyone involved in staging the meeting as well as for our partners and fans who have all made the ISTAF an extraordinary event with a worldwide recognition and a real track and field party for many years. And they will continue to do so in the future,“ said Meeting Director Martin Seeber.

A full list of IAAF heritage plaques awarded so far can be seen here: www.iaaf.org/heritage/plaque