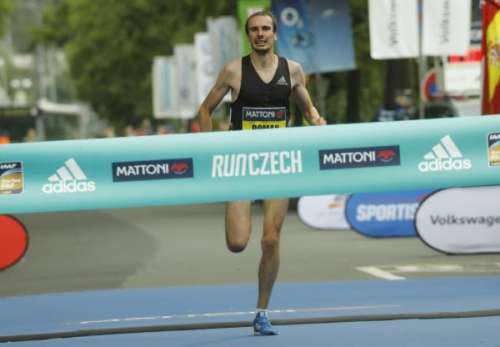 Let the battle commence for athletics heroes across the continent. The RunCzech project EuroHeroes kicks off at 6 pm on Saturday 18th May at the Mattoni Karlovy Vary Half Marathon. EuroHeroes is the initiative that RunCzech has launched in cooperation with the European Athletics aimed to celebrate European running stars and to find new sporting heroes.

Participants expected to head to the race include a hand-picked selection of top runners from Ukraine, Spain, and Italy, France as well as a number of top Czech competitors. The RunCzech project, which also extends to four other cities, offers runners the chance to put their abilities to the test, to support European athletics and impress fans with their amazing results.

A key star to look out for on the elite start line is the winner of last year’s Mattoni Karlovy Vary Half Marathon who also ranks among the hot favourites to take the number one spot on the podium this year. So far this year, Roman Romanenko has completed the half marathon in Kiev, finishing fifth there in a time of 1:04:36. His absolute best of 1:03:22, however hails from his home city of Bila Tserkva recorded in 2017. Many predict that he may be saving himself for the Czech races where the fruits of his efforts will be seen. Romanenko boasts an impressive collection of half marathon wins in Bila Tserkva, Dnipro, Kharkiv, Dushanbe, Munich and Karlovy Vary.

The Italian athlete Yassine Rachik (1:02:29 in Naples this year) and the Spanish runner El Hassan Oubaddi (1:02:40 in the French commune of Boulogne-Billancourt) won’t want to make this easy for Romanenko however. The twenty-five year old Rachik is three-times national champion in his home country, plus boasts a bronze medal from the European Championships in Berlin. During the 2019 London Marathon he managed to improve his PB from 2:12:09 to 2:08:05 and finished ninth. So far Oubaddi has predominantly competed in races in Spain, shining, above all, on shorter courses. This is only his second season running half marathons, however he has already managed second place in Madrid and the Polish city of Gdynia. He has run three half marathons this year so far.

Irish marathon runner and physician, Paul Pollock, who hails from the Belfast district of Holywood (Northern Ireland) also has some decent times under his belt (1:04:06). He is Ireland’s third fastest long-distance runner of all time. French runner and RunCzech Racing team member Mehdi Frere also boasts an excellent time of 1:04:21 from the Sportisimo Prague Half Marathon. Finally, another Ukrainian native Mykola Yukhymchuk (1:05:50) will be keen for a slice of the winning action.

The top half marathon time in the women’s category belongs to Moldovan runner Lilia Fisikovici whose personal best of 1:10:45 hails from the Mattoni Ústí nad Labem Half Marathon. The dainty runner is also the first woman athlete in her country to qualify for the Tokyo 2020 Olympic Games. She previously competed at the marathon during the Rio Olympics.

Sure to be chasing her tail on the streets of Karlovy Vary and its celebrated colonnade will be Ukrainian runner Viktorya Kalyuzhna. She boasts a fantastic time of 1:11:50 held at a race on home turf in Bila Tserkva last year, though this was only enough to secure her second place there. She also shone at the 2018 Kiev half marathon scooping up first place, plus picked up second in Madrid and at the Ukrainian cup in Kirivograd.

Overall Ukraine will be offering a very strong start line. The youngest of the group, Kalyuzhna will be joined on the course by three other compatriots. Olha Skrypak holds the bronze medal from the 10 000 metres at the 2012 European Championships in Helsinki, and can pride herself on a half marathon personal best time of 1:13.48 recorded at the Mattoni Olomouc Half Marathon. Veteran runner Olha Kotovska, meanwhile, boasts a recent personal best of 1:14:14 achieved on Czech soil at the Mattoni České Budějovice Half Marathon, though her fastest overall half marathon hails from Ostia in 2011, where she delivered an impressive 1:12:19 finish. In 2016 she even represented Ukraine at the Rio Olympics. Her compatriot Yulia Schmatenko, however, has managed even faster, proving such the year before last at the Bila Tserkva race, winning there with a fantastic time of 1:11:22.

Brno-based matador Jan Kohut, whose personal best currently stands at 1:06:18, will also be venturing out to Bohemia to take on the Mattoni Karlovy Vary Half Marathon. In addition to running professionally, he also earns a living as a fitness trainer and masseur. Jiří Csirik has experience training in Kenya, where he tried out for the first time last year, helping him achieve his best time of 1:09:54 at the Sportisimo Prague Half Marathon.

Long-distance runner Petra Pastorová (1:14:10) is a surprise addition to the start line. Having triumphed at the Czech marathon championships held as part of the Volkswagen Prague Marathon in May, this will be her third challenging race over a short space of time. However she will face competition from local star Petra Kamínková (1:12:12), who has also secured the national championship title a total of seventeen times. That sad, veteran runner from the neighbouring Sokolov Ivana Sekyrová (1:14:06) may also have a few tricks up her sleeve.

The EuroHeroes season is just getting under way featuring an impressive array of top names which will likely deliver just as impressive running results. Karlovy Vary is set to play host to the first episode at 6pm on 18th May. This will be followed by races in České Budějovice (1st June), a festive event in Olomouc (15th June), culminating in Ústí nad Labem (21st September).