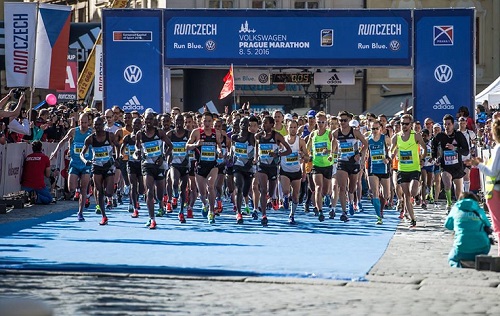 The Volkswagen Prague Marathon, the IAAF Gold Label race, kicks off in several weeks and RunCzech is delighted to report a number of stars confirmed to take part in the race’s 25th anniversary. Get ready to extend a warm welcome to a whole host of top Kenyan runners, plus the crème de la crème of European and local talent. On 5th May they will, of course, also be joined on the course by ten thousand other recreational and performance runners all looking for a slice of the action.

It looks set to be a pretty spectacular occasion! So far the hot favourite to cross the finish line on Pařížská Street is Kenyan runner Mathew Kipkoech Kisorio. The talented African runner will be arriving in Prague just before he turns 30 and so will be setting himself a few challenges, which achieved, are sure to trump any other birthday gifts. He boasts an excellent time of 2:04:53 recorded at last year’s race in Valencia. Providing he’s able to stay on such form, he could well smash the Volkswagen Prague Marathon race record which currently stands at 2:05:39, held by fellow compatriot Eliud Kiptanui from 2010.

Giving him a run for his money will be number thirteen on the men’s word rankings and former junior African champion in the 5 and 10 kilometre distance, Moroccan runner El Mahjoub Dazz who recorded an impressive time of 2:05:26 in a direct confrontation with his rival in Valencia back in December and will certainly be looking to get his revenge on Kisorio in Prague. Other top runners to watch out for include Amos Kipruto. He ran his last marathon in Berlin in 2:06:23, though has managed to push his absolute best down to 2 hours and 6 minutes.

A further three Kenyans also delivered impressive performances at the start of the year. Yego Solomon Kirwa used the Valencia race to prepare for the Volkswagen Prague Marathon. During his career in professional athletics, another hot race favourite (also incidentally Mathew Kipkoech Kisorio’s bother) and former winner of the Macau marathon and Paris marathon, Peter Kimeli Some has scored times under 2:06 while Paul Maina’s personal lifetime best so far is 2:08:49 from Marrakech.

Other top runners include the Kenyan athlete Bernard Kiprop Kipyego and the young Ethiopian runner Aychew Bantie. The 2012 London Olympics athlete will also be returning to Prague to enhance his twenty-ninth place position from last year’s Prague race. Running his Prague race premiere, meanwhile will be Spanish runner Hamid Ben Dauod who until now has mostly competed in his home country as well as Morocco and Turkey.

We’re pleased to report a strong start line among the women too. Kenyan runner Bornes Jepkirui Kitur has fond memories of Prague, having run her best professional performance (2:24:19) here in the heart of Europe, which she won by almost a minute last year, and she continues to rank among the favourites.

The top three women marathon runners are all at a similar level. Naturalised Israeli runner Lonah Chemtai Salpeter, European Champion for 10,000 m, currently holds the title of sports woman of the year in her homeland and also is two seconds ahead of Kitur in terms of personal best times. American runner Kelly Taylor Johnson will be bringing a similarly impressive result on record (from Duluth) – fingers crossed she’ll be able to shave even more off that time and keep up with the wonderfully prepared African runners.

Despite the predictions, Kenyan runner Lucy Cheruiyot who will be running her first ever marathon race, might have a few surprises up her sleeve. So far she has shone at both ten kilometre and half marathon events and her current performance suggests she has the capability to make it to the top three. Compatriot Genet Yalew also ran a fantastic race last season in Dubai, finishing the demanding race there in 2:27:46.

On top of that Yalew is also a highly versatile running, responding well to track, cross-country as well as road races, plus her time of 1:06:26, has catapulted her to the TOP 10 best times in history, while also securing her the title of best Ethiopian national half marathon time on record. Amane Beriso, who finished sixth at last year’s Toronto marathon, will also be coming well prepared.

Meanwhile thirty-five year old Mamitu Daska ranks among Ethiopia’s running legends. She has previously picked up two Silvers at the Cross-country World Championships. She ran her last marathon in 2019 (New York), taking 9th place there with a time of 2:30:31.

The true veteran in Prague however will be 41-year old Serbian runner Olivera Jevtić who has represented her country at five Olympic Games in a row, the last of which was in Rio de Janeiro. The popular runner took Europe and the world by storm at the start of the new millennium scooping up big medals at the European Championships, Mediterranean Games, European Championships and Cross Country races. She holds one silver marathon medal from the 2006 European Championships held in the Swedish city of Gothenburg. The Czech long-distance legend Ivana Sekyrová will be oldest participating professional woman runner, however.

The Volkswagen Prague Marathon also promises to play host to some top performances by Czech runners. University of Brno athlete and best road racer on the local scene right now Jiří Homoláč will be taking on the 42 kilometre distance shortly after returning from a competition in Kenya and will be keen to defend his time of 2:20:09 from the previous year, though his personal best marathon record is almost three minutes better than this.

Find out more at https://www.runczech.com